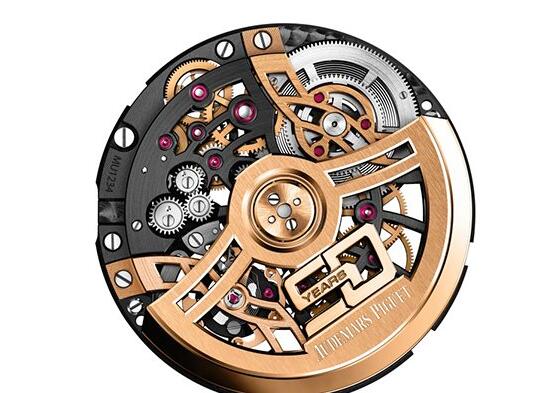 Swiss Haute Horlogerie manufacturer Audemars Piguet introduces a brand new generation of Royal Oak “Jumbo” Extra-Thin Openworked (ref. 16204) on the occasion of the Royal Oak’s 50th anniversary. Available in either stainless steel or 18-carat pink gold, this watch houses the Manufacture’s new dedicated selfwinding extra-thin openworked movement, Calibre 7124, as well as the Audemars Piguet Royal Oak’s “50-years” anniversary oscillating weight visible through the sapphire caseback. The watch’s highly contemporary design reflects the Manufacture’s ever-more creative reinterpretation of age-old techniques attuned to the Royal Oak’s uncompromising spirit.
The two new timepieces premiere Calibre 7124, the openworked derivative of the Manufacture’s extra-thin selfwinding movement, Calibre 7121, which powers the newly released 16202 references. Both calibres were developed in parallel, which means that the position and geometries of the different components equipping both movements have been meticulously conceived from the start to obtain a harmonious and well-balanced openworked version.

Making no compromise, Calibre 7124 brings together precision, performance, age-old openworking expertise and extra-thinness. Measuring a mere 2.7 mm in height, this extra-thin selfwinding openworked hour and minute movement contains more energy than its predecessor Calibre 5122 (3.05 mm), thanks to its larger barrel. Like Calibre 7121, Calibre 7124 is equipped with a contemporary slim oscillating weight mounted on ball bearings that utilises two reversers developed in-house to ensure bidirectional winding. In addition, its balance wheel is fitted with inertia blocks that have been directly inserted within the balance wheel to avoid unnecessary friction.

Its openworked architecture requires artisans’ manual dexterity and attention to detail. Introduced at Audemars Piguet in the 1930s, the art of openworking consists of removing as much material as possible from the movement bridges and plate without impairing its functions. Light passes through, revealing the mechanism’s finesse and purity. The preliminary geometries of the mainplate and bridges are cut through computer numerical control (CNC) machining, before being perfected by electric discharge machining (EDM). This manufacturing process enables to remove small amounts of material with extreme precision to reach the desired shape. Each component is then finished and decorated with age-old techniques. The polished V angles that can be admired on both sides of the watch reflect the meticulous handiwork that went into their realisation as this level of craftsmanship can only be done by hand.
The case and bracelet of the two Audemars Piguet Royal Oak “Jumbo” Extra-Thin Openworked timepieces have been finished with the Manufacture’s signature alternation of satin-brushed and polished surfaces all the way down to the bracelet folding clasp.

The stainless steel version is complemented with a matching rhodium-toned openworked movement offering a unique play of light. The rhodium-toned 22-carat pink gold “50 years” oscillating weight – that can be found on Royal Oak anniversary models throughout 2022 – similarly blends with the movement’s grey shades on the caseback side. The 18-carat pink gold hour-markers and hands, as well as the pink-gold toned gear train and balance wheel peeking through the openworked bridges offer a subtle contrast, while reinforcing the watch’s contemporary monochromatic aesthetic.
The 18-carat pink gold timepiece marries different tones: the slate grey openworked bridges and mainplate are complemented with a light grey openworked barrel at 11 o’clock, which reveals the coiled mainspring – the watch’s main source of energy. The barrel subtly echoes the white gold hexagonal screws securing the bezel onto the case. In addition, the pink-gold toned balance wheel and gear train, further accentuated by the 18-carat hour-markers and hands, add depth and light to the watch. The 22-carat pink gold anniversary oscillating weight offers a similar contrast on the caseback side.
Evolving with each decade, the Audemars Piguet Royal Oak collection has included more than 50 openworked models to this day, fitted with different movements and coming in a variety of sizes, materials and styles – the result of numerous decades of passion and expertise passed down across generations.

During the early years of its history, Calibre 2120 and its derivatives, including Calibre 2121 which powered the first Royal Oak, remained hidden inside watch cases. The arrival of quartz overturned these codes: it was time to highlight and reveal the beauty of mechanical movements and the traditional expertise utilised.

In the early 1970s, a few young watchmakers at Audemars Piguet set about rediscovering the art of openworking in which the brand had excelled in the 1930s and 50s, abetted by their elders, and the company’s first dedicated openworking workshop saw the light of day. The vision of Managing Director Georges Golay at the time was ambitious, as the operation kicked off with a hundred openworked examples of Calibre 2120—a painstaking task amounting to 150 hours of work for a single movement. The first watch (Model 5442) was delivered in November 1973 and some 30 watches were crafted annually until 1976. In 1978, 300 openworked watches fitted with Calibre 2120 were produced within Audemars Piguet’s walls. By 1984, the workshop counted a dozen artisans entirely dedicated to the art of openworking.

Openworking first appeared in the Royal Oak collection in 1981 with a pendant version, Model 5710BA, followed in 1986 with Model 25636 equipped with the ultra-thin selfwinding perpetual calendar Calibre 2120/2800. However, this art truly established itself into the collection in the 1990s – a decade that witnessed many openworked Royal Oak models in a variety of sizes and styles.
The first openworked “Jumbo” was launched in 1992 – a one-of-a-kind model (14811), whose dial was decorated with a finely chased oak motif, auctioned off to support the new Audemars Piguet Foundation. Several other openworked “Jumbo” models equipped with extra-thin Calibre 2120 were introduced in very small series until the year 2000. While some models were graced with gemset hands (e.g. 14789, 14793 and 14814), others featured highly stylised designs, such as Models 14884 and 12518 (a unique 125th anniversary creation) which featured a naval anchor against a background of stormy waves surrounded by ropes.

Openworking returned in the “Jumbo” collection in 2010 with Model 15305, this time equipped with selfwinding Calibre 3129 measuring 4.31 mm in thickness. The movement’s galvanic treatment elegantly contrasted with the stainless steel case. Two years later, the Manufacture launched a new slate grey openworked “Jumbo” limited edition for the Royal Oak’s 40th anniversary, powered by the new Calibre 5122 which was framed in an elegant 950 platinum case. In 2014, an 18-carat pink gold version was released.

This year, the Audemars Piguet Royal Oak “Jumbo” Extra-Thin Openworked makes its come back once again with a new movement and a refined aesthetic testifying to the Manufacture’s uncompromising spirit.