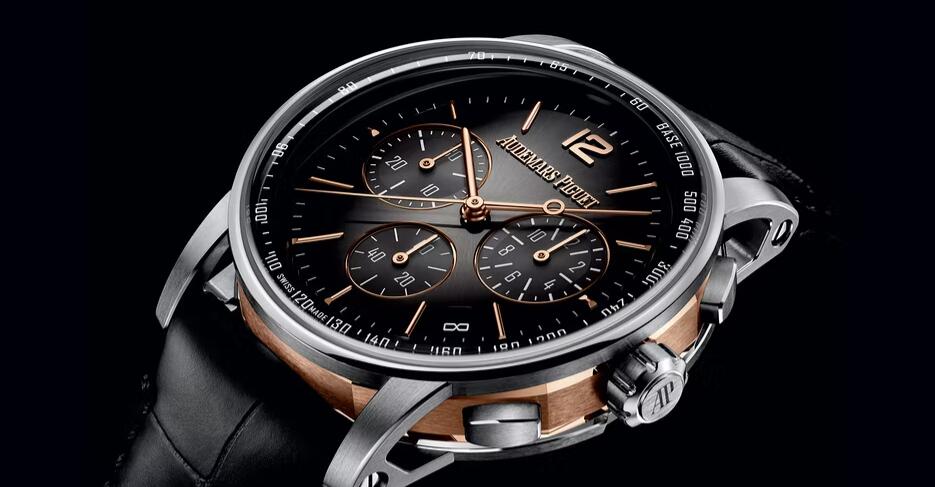 I have always thought that the most challenging part of a watch to design, particularly if the watch is round, are the lugs. The transition from case to lug affects everything – how it is handled affects not only the appearance of the watch, but also how it feels once it is on the wrist. The fact that wristwatches must be attached to the furthest end of the human upper extremity means that the connection must be a secure one, and for that reason, various geometrical cases became a part of the early history of the first true wristwatches, and the first wristwatches from Audemars Piguet, almost immediately. Beyond the strict geometry of rectilinear cases, there is also, once the technical problem of securing round or oval watches has been solved (and it was largely solved by the invention of the spring bar), the fact that rectilinear geometry in watch cases offers an opportunity to depart dramatically from the tyranny of the round case. AP has, for most of its history, done just that – not exclusively, perhaps, but consistently.
The crystal of a watch is, as a rule, something that is expected to disappear – we generally judge the quality of a crystal by the degree to which it is invisible and lets us experience the dial unobstructed. The exceptions to this are mostly watches in which the crystal is an extension of the case – watches with sapphire cases are the most obvious example. I can’t think of another modern watch in which the creation of a specific optical effect, with what at first glance seems a conventional round crystal, is part of the design of the watch, and the double curved crystal in the CODE 11.59 collection is a bit disturbing at first. Its unusual geometry is invisible when you look at the watch straight on, but viewed from an angle you get a very striking tiered effect – one thinks of the rows of seating in a Roman or Greek amphitheater.
The effect is somewhat muted, in the entry-level models, by the flatness of the dials, but in the new lacquer gradient models, you get a much greater sense of depth and three-dimensionality. This, in turn, means that there is a better sense of continuity across all the various aspects of the watch – dial, case, and movement finishing all seem much more of a piece. This extends even to a greater sense of connection between the case finishing and movement finishing – in fact, of all the new models, the two-tone ones are, I think, the most compelling. The new movements are very much, in their general visual effects, a good partner to the collection overall. I think they mate especially well with the white-gold and rose-gold combination cases – you have, of course, the rotors of both the chronograph and time only models, but you also have the combination of mirror polished and brushed surfaces in both the case and the mechanism, and they seem to connect with each other, and with other aspects of the design, much better with the new gradient dial models. Small changes can make big differences. The new CODE 11.59 dials have, in my view, thrown the virtues of the designs into high relief, and they also create a bridge between case, movement, dial – and crystal, which is just as much a part of the design in its optical effects as any other part of the watch – which was perhaps a bit undermined by the understated dials of the launch models (again, in the Selfwinding and Selfwinding Chronograph models only; the high complications are another story and should be discussed separately).
It would be extremely premature to judge the Audemars Piguet CODE 11.59 Chronograph Selfwinding collection a success. However, I think it would also be premature to judge it a failure. In the larger context of design at Audemars Piguet, the collection sits in a long and very complex tradition of innovation in cases; in the larger context of movement manufacturing, the collection also sits in a very long and complex tradition of both simple and complicated watchmaking. These latest versions of the CODE 11.59 collection have not done all that much in terms of design or technical innovation relative to the launch models, but the new lacquer gradient dials are like a plug pushed into a socket – the mechanisms on either side are where the real action is, but without the spark of connection, nothing comes to life. It will be most interesting to see where AP goes next with the collection – it obviously represents not only the expenditure of considerable capital resources, but also considerable creative energy as well. The simpler launch models may not have quite stuck the landing, but then, neither did the first SpaceX reusable boosters, and we all know that today they’re pretty much not only hitting their marks, but exceeding expectations in every way. Sometimes big ideas take a while to deliver on their promise, especially if they’re living their lives in public; it’ll be intriguing to see where AP takes the collection next.