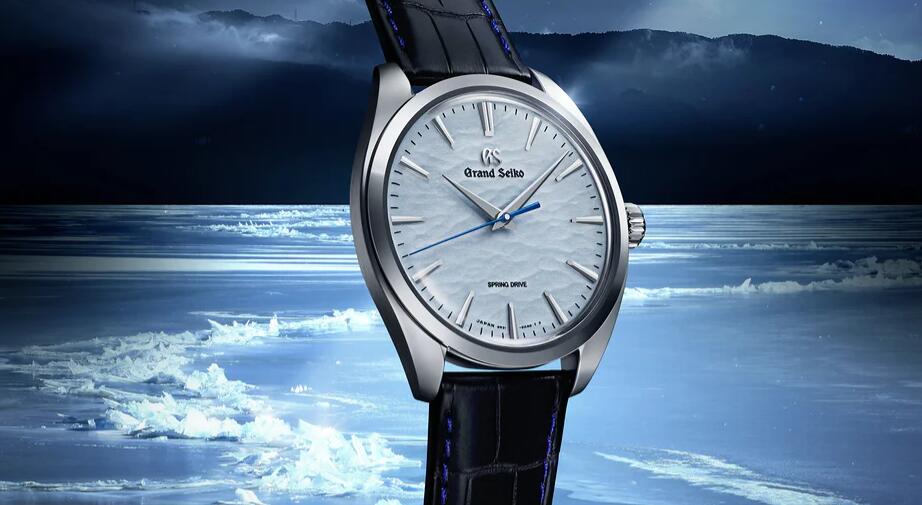 Grand Seiko has just announced a new hand-wound Spring Drive watch. Like all Grand Seiko watches it has a rather gnomic alphanumeric designation: SBGY007. But its other name makes up for the lack of poetry in spades – this is the “Omiwatari” Grand Seiko, and the name means “the pathway of the gods.”
Lake Suwa, in Central Japan, freezes over if the winter cold is deep enough, and as it does, giant pressure fissures that can be kilometers long form across its surface. These enormous ridges are said to be the track left by the Shinto deity, Takeminakata-no-kami, who is the patron deity of the ancient Suwa Taisha Shrine. Legend has it that if the ice is thick enough, he departs his ancient abode to visit the deity, Yasakatome-no-kami – she is the resident of the Lower Shrine of Suwa Taisha.
The track of the deity Takeminakata-no-kami, is called Omiwatari, or the pathway of the god. The dial of the Grand Seiko of the same name, had ridges and ripples in it inspired by the rugose appearance of the lake surface, when it fully freezes over. If the lake does not freeze over, the winter is known as Akenoumi, and thanks to climate change, winters during which the Omiwatari can be observed have grown more and more infrequent.
The SBGY007 uses the hand-wound Grand Seiko Spring Drive caliber 9R31, which was introduced in the steel SBGY003, and the gold SBGY002, in 2019. Hand-wound Spring Drive watches have been a relative rarity from Grand Seiko (and Credor) and as far as I can remember, this is the first hand-wound Grand Seiko Spring Drive watch which is not a limited edition – good news, certainly for Grand Seiko enthusiasts. The steel case measures 38.5mm and the price is $8,300. The watch will launch in July at “selected retailers” and Grand Seiko boutiques.
What I think is that this is one hell of a watch. The caliber 9R31, as we reported in 2019, is a less elaborately decorated version of the then-also-new 9R02, which is essentially finished to Eichi II standards and which sits right at the top of the pecking order of Grand Seiko movements. 9R31 has so far only been released in the two aforementioned limited editions (only SBGY002 is still in Grand Seiko’s catalogue) and the new Omiwatari watch represents the first deployment of the caliber into a regular production watch.
It feels to me like a very special occasion and a cause for celebration. Spring Drive is unique among timekeeping technologies – the Swiss experimented with a similar idea but never did anything with it, and Spring Drive offers an experience of the passage of time hard to find elsewhere. This is also, in its own way, an almost elegaic watch – the gradual loss to climate change of the brutal beauty of the frozen north is something to remember.
I never particularly thought, five or six or seven years ago, that I would feel a sense of gratitude for a steel Grand Seiko priced at $8,300, but at the same time, the pivot to the (very) high end by Grand Seiko has been a big source of anxiety for me – and to see something this classy offered at a relatively affordable price point, in a non-limited edition watch, is good for the morale. I’m very pleased to see this one in the pipeline and look very much forward to seeing one in person. That dial ought to be pretty good, if previous Grand Seiko dials are any indication. With a thinner hand-wound Spring Drive movement, this might be the watch to finally unseat the Snowflake as a fan favorite.
The Grand Seiko SBGY007 Omiwatari: case, stainless steel, 38.5mm x 10.2mm; 30 meters water resistance. Movement, hand-wound Spring Drive caliber 9r31, rated to ±1 second per day maximum deviation in rate; power reserve 72 hours, running in 30 jewels. Available this July.