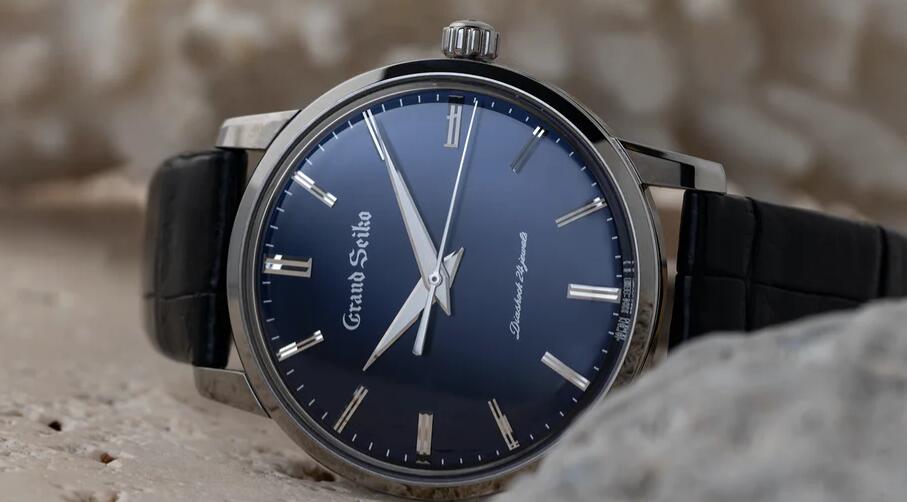 In March of 2020, Grand Seiko released three watches to celebrate the 60th anniversary of the first Grand Seiko – which, in keeping with Grand Seiko’s generally somewhat laconic approach to product names, is usually just called “First,” by enthusiasts. All three of these watches were powered by the hand-wound Grand Seiko cal. 9S64.

They came in platinum and gold, but the one that really sunk the hook in for me was SBGW259. While it shares the same “First” case design as the gold and platinum watches, it’s made of a very un-traditional (by Grand Seiko “First” standards) metal. The material in question is Grand Seiko’s Brilliant Hard titanium, which is twice as hard as conventional stainless steel.
Titanium is widely used for watch cases, but often, some sort of surface hardening has to be applied. It’s a very strong metal – stronger than most steels, at about half the mass, which is why it’s used so much in airframes. It is, however, relatively easy to scratch. Not only is Brilliant Hard titanium much more scratch-resistant than the grade 5 titanium commonly used for watch cases, it can also take a very high polish, which in the SBGW259 gives the glittering surfaces and sharp facets which Grand Seiko enthusiasts value so highly. Side by side with other steel Grand Seikos, SBGW259 gleams at least as brightly, if not more so.
Grand Seiko has been swinging hard for the wow factor in recent years, with the introduction of new movements, new models, and in many cases, much bolder designs. SBGW259 is not exactly a return to form, because, in a sense, it’s a form Grand Seiko never left. Despite the fact that it’s the pricey limited editions that tend to stick in one’s mind, Grand Seiko still has a lot of pretty classic GS models in its lineup – including about forty watches priced at $5,000 and under. But it is a manifestation, in a new Grand Seiko, of something Grand Seiko does extremely well which lately, it’s been easy to forget.
It is, in short, a watch that doesn’t so much dazzle as seduce. In person, the dial is a very deep ultramarine and the diamond-polished hands and indexes glow against it like phosphorescent sea creatures. Normally I’m not doctrinaire about date windows – first of all, they help watches sell, and secondly, they’re useful, especially if like me you sometimes have trouble remembering what day of the week it is, let alone the date. “First” limited editions uniformly omit them for obvious reasons.

But SBGW259 is an especially good argument against date windows – even a nice one would have felt tragically out of place, like putting snow tires on a DB-5.
And it wears like a dream. One necessary trait, I think, of an everyday watch is that it should more or less disappear on the wrist. This is something that we don’t often take into consideration, but having worn probably hundreds of watches for review, for anywhere from a day to several months, over the past 20 years, I’ve really come to appreciate the practical value of a wristwatch that’s there when you need it and doesn’t call attention to itself when you don’t.
In everyday use, its simplicity is its greatest virtue. The crown is easy to grasp and makes winding the caliber 9S64 the private, tactile pleasure that it should be; the radiance of the case and hands makes every glance at the time a moment of minor-key but definite joyous rediscovery, and the 38mm titanium case has the just-right feel, in the wrist and on the hand, of objects like a well-balanced chef’s knife or a classic film Leica IIIF from the 1950s (one of the most beautiful cameras ever made).
The theater and film critic John Simon (whose pen used to terrify all of Broadway on a regular basis) once said something very interesting about Edmond Rostand’s play, Cyrano de Bergerac. He said, “It is not a great play, merely a perfect one.” You can parse that a lot of ways but it raises a very interesting question: When does perfection rise to greatness? I can certainly think of works of art that rise to greatness that aren’t perfect, and I suppose that expecting an object like a wristwatch – which at best is an expression of craft, not a work of art – to rise to that level of greatness is misplaced.

But the SBGW259 comes awfully close, and like the play about the lad with the long nose and the long sword, it has an admirably harmonious relationship of part to part that never gets old. It just needs a catchier name. Blue Angel, anyone?