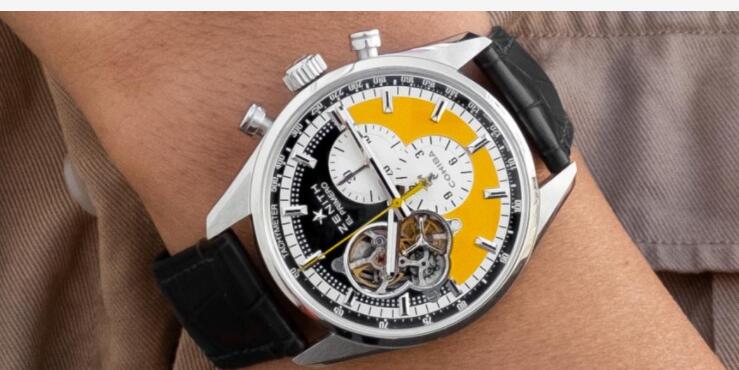 From Havana to Le Locle and all over the world, cigar aficionados are celebrating 2021 as the 55th anniversary of one of the most distinguished and revered Cuban cigar makers, Cohiba. Now marking its fifth year of collaboration with Habanos and the sixth special edition with Cohiba, Zenith is joining the celebration with a delectable and highly exclusive commemorative edition of the Chronomaster Open.

Born from the shared pursuit of excellence through precision, authenticity and tradition, Zenith and Cohiba are marking a new milestone in their partnership tailored for those who seek out precious moments to indulge and savour the work of artisans.

Right on time for Habanos World Days, a three-day online event whose program is similar to the traditional on-location festival organized for over 20 years in Havana consisting of thematic conferences, virtual tours of cigar factories and the Habanos World Challenge competition testing the knowledge of avid cigar lovers, Zenith is joining Cohiba in celebrating its 55th anniversary with a special commemorative limited edition watch.

Zenith has reimagined its emblematic Chronomaster Open in a manner that immediately evokes Cohiba’s unique aesthetic. Taking on the striking design codes of the packaging and paper bands that wrap each of its entirely hand-rolled and exquisitely blended cigars, the dial of the Chronomaster Open Cohiba 55th anniversary edition is done in the distinct saffron-yellow tone and white on black checkered motif. A yellow chronograph seconds hand with a star-shaped counterweight completes the look, while the black alligator leather strap harmoniously accentuates the checkered pattern of the dial.

Limited to just 55 pieces, the Zenith Chronomaster Open Cohiba 55th anniversary edition is completed with a special display back with the special Cohiba 55 logo printed on the interior side of the sapphire crystal. To enjoy the full epicurean experience, each watch will come with a set of 5 special Cohiba cigars presented in an exclusive cobranded porcelain jar.

The Zenith Chronomaster Cohiba 55th anniversary edition will be available exclusively at Zenith boutiques and select retailers around the world from October 2021.

Zenith exists to inspire individuals to pursue their dreams and make them come true – against all odds. Since its establishment in 1865, Zenith became the first watch manufacture in the modern sense of the term, and its watches have accompanied extraordinary figures that dreamt big and strived to achieve the impossible – from Louis Blériot’s history-making flight across the English Channel to Felix Baumgartner’s record-setting stratospheric free-fall jump. Zenith is also highlighting visionary and trailblazing women – past and present – by celebrating their accomplishments and creating in 2020 its first-ever collection dedicated entirely to them, Defy Midnight.

With innovation as its guiding star, Zenith features exceptional in-house developed and manufactured movements in all its watches. Since the creation of the El Primero in 1969, the world’s first automatic chronograph calibre, Zenith has gone on to master fractions of the second with the Chronomaster Sport and its 1/10th of a second precision and the DEFY 21 with a precision of 1/100th of a second. Zenith has been shaping the future of Swiss watchmaking since 1865, accompanying those who dare to challenge themselves and break barriers. The time to reach your star is now.

For the past 5 years, Zenith has been partnering with what’s probably one of the most revered and famous cigar makers around the globe, Cohiba. This has already resulted in various limited edition models, all showing cigar-inspired coloured and design elements. But this year is rather special for the Cuban brand, since it will celebrate its 55th anniversary. Now marking its fifth year of collaboration with Habanos and the sixth special edition with Cohiba, the Le Locle-based brand unveils the new Zenith Chronomaster Open Cohiba 55th Anniversary Edition.

Right on time for Habanos World Days, a three-day online event whose program is similar to the traditional on-location festival organized for over 20 years in Havana consisting of thematic conferences, virtual tours of cigar factories and the Habanos World Challenge competition testing the knowledge of avid cigar lovers, Zenith is joining the celebrations with this highly limited watch, in the famous colours of the famous Cuban cigar maker Cohiba.

Inspired by the signature two-tone box used for cigars, Zenith is reimagining one of its classics, the Chronomaster Open. Taking on the striking design codes of the packaging and paper bands that wrap each of the hand-rolled cigars, the dial of this new Chronomaster Open Cohiba 55th Anniversary Edition is executed in the distinct saffron-yellow tone for the lower part of the dial, and white-on-black checkered motif, for the upper part. In addition to the classic faceted and rhodium-plated hands and applied indexes, the brand also includes a yellow chronograph seconds hand with a star-shaped counterweight. The sub-dials for the 30-minute and 12-hour counters are executed in silvery-white. And being Chronomaster Open, the watch features an aperture between 9 and 12 o’clock, revealing the hi-beat regulator and its escapement with purple-coloured silicon escape wheel and lever. Complementing the look of this 42mm stainless steel case, the watch is worn on a discreet black alligator strap with a folding buckle.

Under the sapphire crystal, decorated with the Cohiba 55 logo printed on the interior side, is the Calibre El Primero 4061, a chronometer-certified, automatic high-frequency integrated chronograph, with a column wheel and a horizontal clutch. Like most El Primero-based engines, it beats at 5Hz (36,000vph). It boasts 50h of power reserve and is decorated with Geneva stripes, circular graining and blued screws.