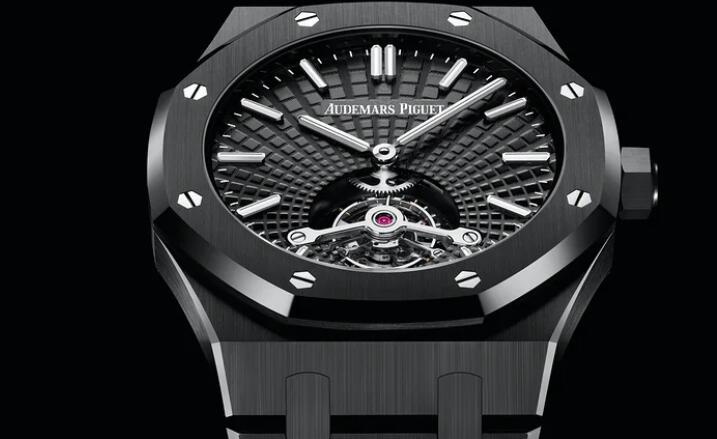 Officially only the third ever ceramic Royal Oak, the new Royal Oak Tourbillon Extra-Thin follows 2017’s Perpetual Calendar and the wild Tourbillon Chronograph Openworked in offering that iconic Royal Oak form in a modern material like ceramic. Sized to 41mm just like the ceramic QP, this new hand-wound model rocks a large tourbillon cut into the six o’clock position of the “Tapisserie Evolutive” dial pattern.
Save for the titanium case back and folding clasp, the entire case, bracelet, and bezel of the Audemars Piguet Royal Oak Tourbillon Extra-Thin are made of ceramic. With a mix of brushed finishing and polished bevels, the rather monochrome nature of this model only works to highlight the tourbillon and ensure the sort of legibility one expects from a Royal Oak.

Also different from its perpetual sibling is the Tourbillon Extra-Thin’s use of a bolder pattern for the dial, which Audemars Piguet calls “Tapisserie Evolutive.” Expanding from a central point shared by the tourbillon, this pattern is offset from the center of the dial and expands asymmetrically. Tucked under the dial is AP’s hand-wound 2924 movement, which ticks at 3 Hz and offers some 70 hours of power reserve. The movement’s lovely architecture can be seen both in part via the large aperture for the tourbillon and through a wide display case back.

Limited to 100 pieces, this ceramic Royal Oak is essentially collector fare from the moment it hits the market. Even at CHF 156,000, with a high-tech case and bracelet, an eye-catching dial, and a tourbillon all wrapped up in the undeniable appeal of the Royal Oak, I doubt it’ll be too hard for AP to find a wrist for each and every one they make.

Audemars Piguet Royal Oak Extra-Thin Tourbillon Watch If this new model looks somewhat familiar it’s because this is the second all-ceramic watch to come from Audemars Piguet. Preceding this model was the Royal Oak Perpetual Calendar Black Ceramic, easily one of the most talked about watches of 2017. As with that watch, the new Royal Oak Extra-Thin Black Ceramic boasts both a case and bracelet made entirely from ceramic (with the exception of the caseback, which is in titanium).With the first model, Audemars Piguet set itself the almost impossible task of finishing its ceramic case and bracelet to the same standard as that of a steel Royal Oak. Achieving this required over 600 hours of R&D, and the finishing of the bracelet alone requires 30 hours. That’s about five times longer than for the steel version. The Royal Oak bracelet is legendary, and when you hold this piece in your hand, or better still, put it on your wrist, you appreciate every single minute spent in the pursuit of perfection.Measuring just 9mm thick, the 41mm case sits very comfortably on the wrist. As you might expect, it’s super light thanks to the use of ceramic. It’s also very eye-catching. All-black watches are generally known for being a bit more understated. “Stealth-like” if you will. Not so here; wear this watch out and everyone will be staring at your wrist. Of course, that may have something to do with the dial…If you recall, Audemars Piguet introduced a new dial pattern to the Royal Oak Extra-Thin Tourbillon collection last year (along with a bold new purple colour too). Called “Tapisserie Evolutive”, the signature “Tapisserie” guilloché pattern was reimagined as a sunburst motif that radiates outwards from the tourbillion.The effect is quite strong but is toned down here somewhat by the decision to use a black dial. I imagine it would have been quite a different story if Audemars Piguet had opted to use the purple/plum colour shown last year (although part of me thinks that would be cool to see).White gold applied hour-markers and Royal Oak hands with luminescent coating are the only other embellishments on the dial. Aside from the ultra-thin tourbillon at six o’clock of course, which is superbly decorated. The overall look is sleek and sophisticated, yet still with that hint of sportiness the Royal Oak is known and loved for.
Inside is the hand-wound Calibre 2924, which measures just 4.46mm thick. It’s the same in-house movement used in the other Royal Oak Extra-Thin Tourbillon models and oscillates at 21,600 v/ph. When fully wound, it offers a max power reserve of 70 hours, the remainder of which is shown on the power reserve indicator on the rear of the movement. Visible through a sapphire window in the titanium caseback, this movement is a prime example of why AP is so good at what it does.Following last year’s changes, the architecture of the bridges has been modified to offer a better view of the moving parts beneath and the Geneva Stripes take on more of a radiating sunburst pattern (known as côtes rayonnantes), emulating that of the dial. Lastly, the movement is finished with a dark grey galvanic treatment, in keeping with the dark theme of the overall watch.