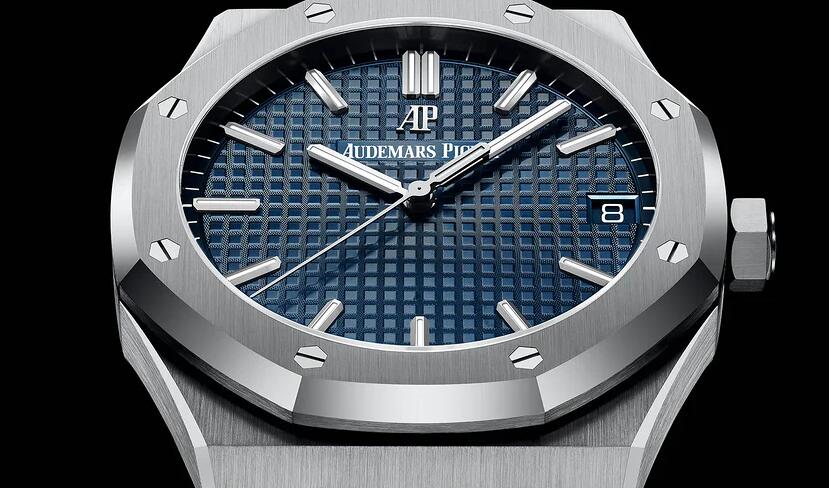 It wouldn’t be SIHH without some updates to the Audemars Piguet Royal Oak Selfwinding Watch collection. This year we’ve got a new base model Royal Oak in the form of the ref. 15500, replacing the ref. 15400 that came out back in 2012. The ref. 15500 is still a 41mm, automatic Royal Oak with classic looks, but the proportions and detailing have been updated with increased legibility and cleanliness in mind. Specifically, the date window is now further from the center, the applied luminous indexes are a bit wider, and the minute track is printed on the very edge of the dial outside the “Grande Tapisserie” pattern. There are five references in total, three in stainless steel (with blue, grey, and black dial options) and two in rose gold (one on a bracelet and one on a strap, both with black dials).

One of the most important updates though is the use of a new movement, the caliber 4302. This in-house movement was just introduced yesterday in the three-hand CODE 11.59 model (see, we told you AP would likely roll these movements out to other watches). This is a much more modern movement than the classic caliber 3120 that powered the ref. 15400 – it beats at 4 Hz instead of 3 Hz, it has 70 hours of power reserve instead of a 60, and it was designed and made totally in-house. Now, this has the added effect of making the watch thicker too, with the ref. 15500 measuring in at 10.4mm top to bottom instead of 9.8mm. Whether or not this makes any difference is yet to be seen, but we’ll be looking for it when we see these in the metal soon.For many die-hard collectors, the “Jumbo” is the “base” Royal Oak, but that’s just not the case. The ref. 15202 is tough to come by and represents a very small percentage of the overall Royal Oak production. It’s this watch, the ref. 15500, that forms the true foundation of the collection, and the technical and aesthetic tweaks offer both something new for customers right now and some insight into where AP sees the Royal Oak going overall.

One of the things I find interesting about the ref. 15500 is just how different is actually is from its predecessor. It would be easy to shrug this release off as an incremental update – that was definitely my first reaction. But just look at how different the 15500 appears from the 15400 when you put the two side by side (the 15500 is on the left, the 15400 on the right): And that doesn’t even take the movement swap into account. I think that while it’s not a particularly splashy release, we’re going to look back at this watch as one of the more important introductions of the fair in terms of impact on consumers.