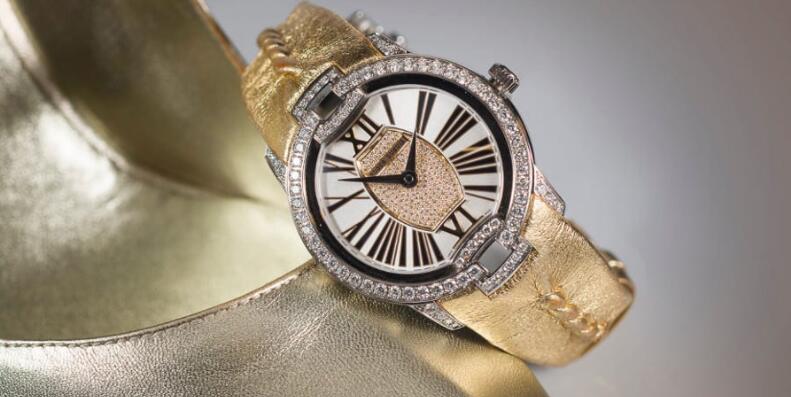 Before taking a look at the pics of the new Roger Dubuis Velvet watches, I decided to carefully look at all the images and videos that were available at the Roger Dubuis stand located at the Palaexpo exhibition and plunge into the magic atmosphere of the 70s and 80s created by Alvaro Maggini, the brand’s creative director. I lived those years on my own skin, I was a very young girl who had just started her career as a disc-jokey, the first female DJ in Italy. That was the time of Andy Warhol, the years of the so-called pop-art and of “Vogue” by Madonna – like the brand clearly suggests – but it was also the time when glam-rock took off and so did the myths of Miami’s South Beach and of “Girls on Film”.
The Roger Dubuis Velvet collection represents a moment when rules are being broken, this concept can be seen more in the collection’s communication message – videos are quite strong and very impacting and you either love them or hate them – rather than in the originality of its high-end jewellery-making and watch-making products. The main idea of the manufacturer is that each model of the Roger Dubuis Velvet collection should represent five different female personalities that go from discreet to aggressive, going through the concept of being free and independent by following the message launched by Gloria Gaynor in her 1984 song “I am what I am”. These five timepieces are called the Roger Dubuis Velvet Ribbon, the Roger Dubuis Velvet Blossom Velvet, the Roger Dubuis Black Velvet, the Roger Dubuis Velvet Secret Heart and the Roger Dubuis Velvet by Massaro.
Behind Roger Dubuis’s idea to capture the attention of those women who are after jewel-timepieces and haute-couture items through an aggressive and original social campaign and a stand decorated as if it were the red Carpet of the Croisette, there is also a collection that brings together the best of two worlds. This is clearly visible on the tonneau dial where the writing “Poinçon de Genève” (the “Geneva Seal”) is finely engraved, on the in-house-built RD821 caliber and on the rare Paraiba tourmalines of the Black Velvet, an exclusive mixture in the world of woman’s watch-making.
The Roger Dubuis Velvet Blossom Velvet represents a discreet and refined woman; a mother-of-pearl-two-level-dial, a gold-made case measuring 36mm and a dial on which Lione Favre has created a floral pattern starting off a thick plate sporting a Grand Feu design.
The centre of each rose sports braided stems made of gold and diamonds – there are 413 stones in total, fourty-eight 0.03-carat-diamonds are located around the tonneau – and it makes the Roger Dubuis Velvet Blossom Velvet the finest timepiece of the entire collection. Only three pieces of this watch have been released.
The Roger Dubuis Velvet Blossom Velvet Pink and Blue (in the pictures above respectively) are two models that derive from the Roger Dubuis Velvet Blossom Velvet (154 diamond and only 88 pieces of each timepiece have been released.)
The double retrograde date is the main feature of the Roger Dubuis Velvet Secret Heart, the most refined timepiece of the whole collection; it sports two sectors aside the central tonneau motif, a multi-level-blue-dial and a thin profile crafted in white gold that has been used to create the central sector of the dial, Roman numbers located at 12 o’clock and at 6 o’clock and Arabic numbers located on the retrograde scales of the calendar. Only 8 pieces of this watch will be released.
The Roger Dubuis Velvet timepiece that best represents the spirit of the Diva Velvet is the Roger Dubuis Velvet by Massaro. In my opinion, it is not the most beautiful watch of the entire collection, but it is definitely the most interesting one; haute-couture, jewellery-making and haute-horlogerie are mixed together (keep in mind that all the Roger Dubuis timepieces have been awarded the Geneva Seal.) No other manufacturer had ever tried to put these three concepts together and Roger Dubuis were the first ones to come up with such an idea and that’s exactly where the originality of their products lies.
The spirit of the brand from Geneva is that they love shocking people; often times, papers and magazines make use of the adjective “daring” in the wrong way, but that’s the exact adjective that should be used to define Roger Dubuis and their apparent contradiction; the Velvet collection challenges conventions and it has been able to create a new haute-couture image in the world of woman’s horlogerie but then take a look at the dial of each Velvet timepiece and you will immediately realize that it clearly represents the top of haute-horlogerie too.