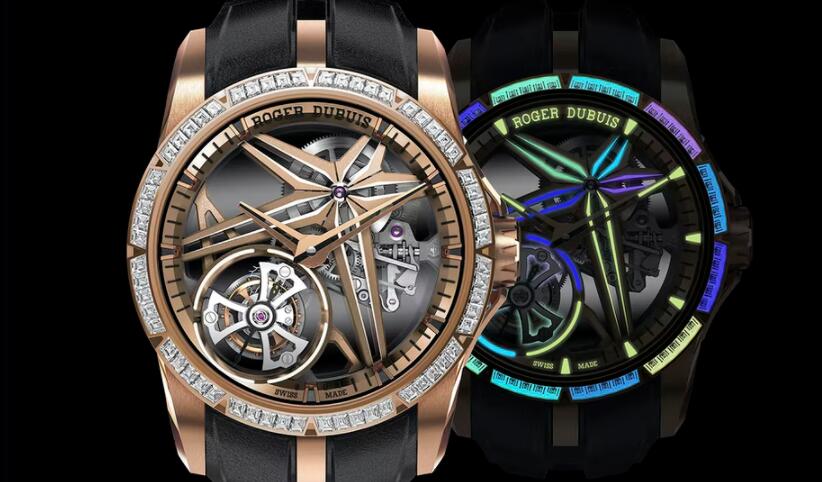 This Diamond-Set Tourbillon Glows In The Dark

“At Roger Dubuis, excess and madness are part of our DNA,” said brand CEO Nicolas Andreatta in a video welcoming attendees to the 2021 virtual Watches & Wonders show. What you’re looking at might be the most excessive Roger Dubuis watch this year.

Prized since ancient times for rarity, value, and the capacity to reflect and refract light, the diamond sits at the very top of the jewelry-making pyramid. It’s the ultimate medium for ornamental luxury; and watchmakers, working in a jewelry-adjacent craft, have of course been known to use them too. In addition to tourbillons and movements skeletonized to within an inch of their life, Roger Dubuis has got the carats. But sometimes, even a blinged-out skeleton tourbillon ain’t enough excess.
The rocks in the Roger Dubuis Excalibur line have something we’ve never seen before in a watch. Roger Dubuis has applied Super-LumiNova to them, letting the bling sing when the midnight hour rings. Each of the 60 baguette-cut diamonds on the Glow Me Up’s bezel has grooves cut into it for its invisible setting. Those grooves are filled with Super-LumiNova, providing a colorful high-jewelry light show and a differentiating factor for a brand that isn’t interested in conservative, old-world haut de gamme watchmaking. This is despite quite famously applying the Geneva Seal to its watches, something a brand no less than Patek Philippe used to do. And every component is hand-finished at the Roger Dubuis Excalibur Manufacture in Geneva. The skeletonized tourbillon is a mainstay of the Roger Dubuis collection. This year, it’s received updates to both the movement and the case, here rendered in a proprietary rose-gold alloy.
The watch you see here is a legit haute horlogerie piece that’s been taken in an irreverently fun direction. I admire the way Roger Dubuis has positioned its watches as at once Poinçon de Genève-worthy and inherently provocative. Do I like every design they make? No. But they have a point of view, and they’re doing things that other brands using the Geneva Seal wouldn’t.
A world premiere limited to eight pieces, the Glow Me Up’s illuminated diamonds have a patent pending, and RD is keen to use the method in more watches down the line. We’re seeing two things that have been business as usual in watches for a long time – diamonds and Super-LumiNova – joined together in an unexpected way. As you can see above, colorful lume is also on the skeletonized bridges as well as the hands, hour markers, the name of the brand, and the perimeter of the tourbillon. They’ve even lit up the words “Swiss Made.”
I wondered whether coating part of a Roger Dubuis Excalibur diamond with Super-LumiNova, a substance that tends to resemble dried paste on some watch dials, did anything to compromise its brilliance. Roger Dubuis said that their patent-pending method does not, in fact, result in a loss of diamond brilliance. So there you go. Brilliance for days. And, especially, for nights.