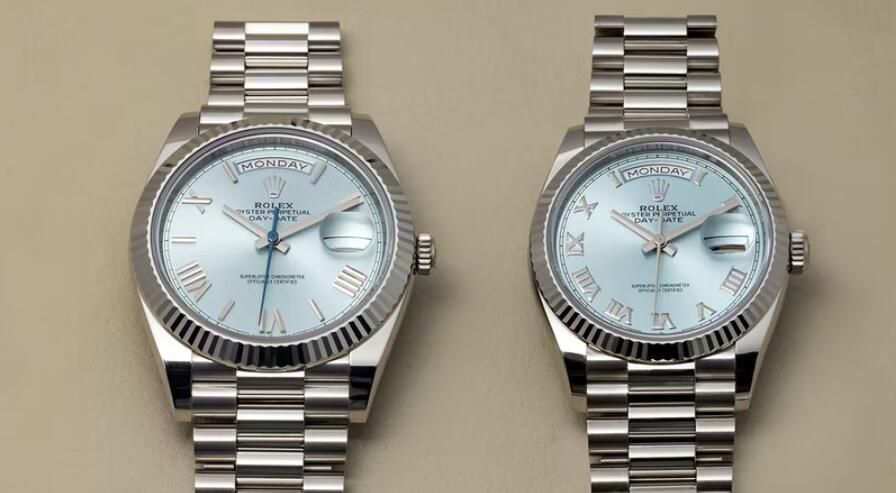 Some Rolex releases present updates that are uniquely Rolex. It’s the sort of stuff that wouldn’t excite someone outside the watch world, and that would make those who pretend not to like Rolex roll their eyes. Take, for example, the new Deepsea Sea-Dweller which saw minor reductions to the bezel, and a change to the clasp. That constitutes a new 2022 release. And today, we’ll be focusing on a model that seemingly falls into that category … until you look closer. We’re going hands-on with the brand-new, for 2022, Rolex Day-Date in platinum.
Like every Rolex release this cycle, we have to start with the teaser video that landed in the days leading up to Watches & Wonders. Some keen-eyed observers likely noticed a little precious-metal-centric imagery and the hint of a fluted bezel. Theories began popping up online that the watch in question was, in fact, a Day-Date. And those theories proved to be spot-on.

It’s a platinum Day-Date with a fluted bezel … so what? Well, the Day-Date in platinum has only ever been presented with a smooth, polished platinum bezel with the signature powdery blue dial. And there’s a reason for that. Platinum is notoriously difficult to work with and tends to really muck up the machines that touch it. A fluted bezel is a fairly intricate cut of metal, producing a detailed and visually interesting alternative to standard polished or brushed fare. It’s become something of an iconic bezel design on Rolex models, both Rolex Day-Date and Datejust – heck, even the Sky-Dweller has been added to the mix.
So this year’s new platinum DD’s – both 36 and 40mm – are important because they represent yet another hurdle overcome for Rolex – a brand that relishes in such things and built its name on a whole host of them. Once we knew what changed it came time to see the watch in the metal, in Geneva at W&W.

We were seated in a room inside the Rolex mansion – er – I mean, booth in the Palexpo when the novelties began getting passed around. Sure, there was excitement over the new GMT, the Air King, and the Yacht-Master, but none were quite as heavy-hitting as the Day-Date. And I mean that literally. This thing is HEAVY.
Aside from the sheer weight (which frankly took me some time to get over), the first thing I noticed was how right the fluted bezel felt in this context. This raises another point which I think is important when examining new watches. Incremental change is essential. Not every new release is going to knock our socks off. I have to think this is the version of this watch Rolex always intended, and I think it’s even cooler that they released it in a smooth bezel configuration for all of these years anyway. But the point is, a watch that feels both old and new – like it’s always been part of the mix – is a successful release.

Jack put it mildly in his Introducing post for this watch when he said that a fluted bezel Rolex Day-Date, “Is probably going to feel like a bit of a monster.” And it does, but in the best way possible. This watch is both a stunt piece and one that flies under the radar (insofar as a Day-Date can fly under a radar). This is because platinum, especially when we’re talking about the 36mm model, can appear as steel. Of course it’s far from it. You don’t need to do weight training to handle stainless steel.
Aesthetically, the dial is effectively the same as it’s always been, with that ice blue, sunray finish. We also have Rolex Roman numeral indices on both models. The 40mm variant has a blued seconds hand and newer Romans. The bracelet is one of the best in the game with its hidden clasp – and honestly, you forget about the weight of the watch once it’s on wrist. Inside is the impressive caliber 3255 with the Chonergy escapement and 70 hours of power reserve.
Platinum isn’t for everyone – and certainly only for those willing to request the price of a platinum Rolex. This is the sort of watch that dreams are made of. I put it on and I think about who I could be if I wore this every day. But I can also appreciate the technical achievement that went into crafting the bezel and allowing this new version to exist in the world. Sure, it doesn’t have lumed markers or indices, but who cares? The platinum glows plenty bright.