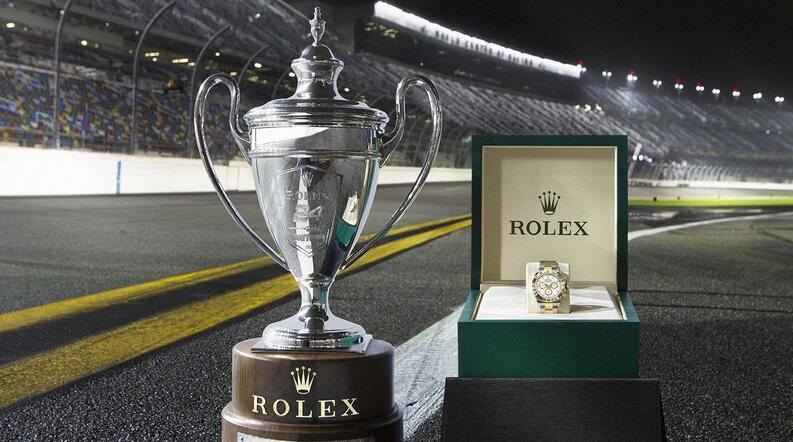 Celebrating 60 Years of the Rolex 24 at Daytona

The Rolex Oyster Perpetual Cosmograph Daytona is among the most coveted sports chronographs wristwatches in the world. But arguably, there is no more special a Daytona than the one bestowed upon the winner of the Rolex 24 Hours of Daytona. This year marked the 60th running of the historic Rolex 24 Hours of Daytona, of which Rolex has been the title sponsor since 1992. And the list of winners of this prestigious race reads like a who’s who of motorsport royalty: Mario Andretti, Ken Miles, Derek Bell, A. J. Foyt, Hurley Haywood, and Scott Pruett – to name a few.

While the trophy is impressive, the allure of walking away with a trophy you can wear – the Cosmograph Daytona – remains a particularly enticing carrot.
Indeed, reflecting on the 60th running of the Rolex 24, five-time winner Scott Pruett said: “All the drivers across the generations come to the speedway for a chance to wear the coveted Rolex Daytona on their wrist; there is nothing as special.” The siren song of that Rolex Oyster Perpetual Cosmograph Daytona aside, the race is known for its incredible displays of both engineering brawn and driving skill. But if you are not a racing fan, here is a quick breakdown: There are five racing classes participating in the race simultaneously. That means there are five sets of cars running five different races on the same track…at the same time! Despite the fact they are not competing against each other, seeing GT cars race alongside prototype series cars is an extremely exciting prospect. Especially since the prototypes are often far faster than the GT cars, and the prototype drivers must skillfully navigate around the GTs, resulting in exciting overtaking maneuvers and displays of pure driving prowess. At the same time, this is an endurance race – and even the best driving can succumb to mechanical failure. The engineering on display from the manufacturers involved at Daytona is just as impressive. I mean, can you imagine running your car at speed for 24 hours straight? In celebration of the 60th running, the race had six grand marshals comprised of past Rolex 24 winners: Scott Pruett, Jack Roush, Wayne Taylor, Hurley Haywood, Bob Rahal, and Mario Andretti. Andretti joked, “It’s so awesome to visit with these dudes and reminisce about some of the stories (and embellish some stories).”
Of the five classes competing this year – DPi, LMP2, LMP3, GTD Pro, and GTD series cars – a DPi prototype series car most often gets the overall win, and this year was no exception. Meyer-Shank Racing Acura #60 took home first overall, completing 761 laps during the race. While there has always been a strong link between motorsports and watches – there will always be something a little extra special about winning the Rolex Oyster Perpetual Cosmograph Daytona 24. This year’s win from Meyer-Shank is the second time driver Hélio Castroneves has taken home the trophy, and he couldn’t have summarized his feelings better than is saying: “You push as hard as you can to win that Rolex.”