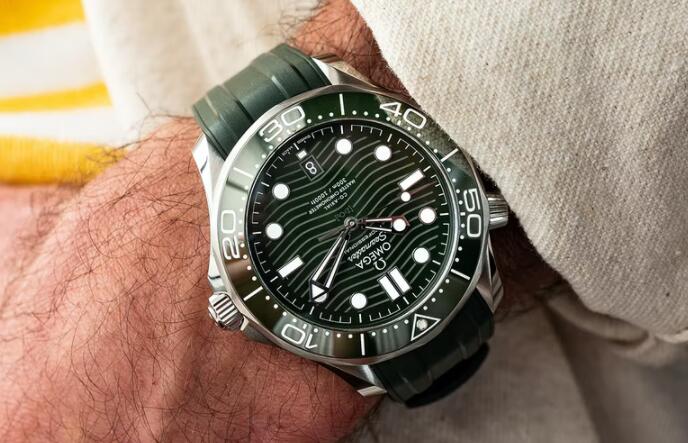 The Watches and Wonders trade show is nigh. But before I fly across the Atlantic to Geneva, Switzerland, I need to address the big green diver in the room. Last week, Omega held its own private event called Omega Days where it unveiled its 2022 novelties. You saw a lot of them here on HODINKEE, from the new Ultra Deep to the multicolored Aqua Terra models to the Omega Moonshine Gold Speedmasters.

And then, out of nowhere, we were handed an absolute bombshell release by way of the new Omega x Swatch MoonSwatch. I already devoted more than 1,000 words on that watch, and you countered with over 700 comments, so I’ll leave it at that.
There’s one Omega release that hasn’t gotten the attention it deserves, partly because it’s just a new colorway: The new Omega Seamaster Diver 300m with a green dial, green bezel, and even greener rubber strap.

It’s the watch nobody saw coming and even felt like an afterthought in Omega’s online presentation of its new releases. The Diver 300 line is the quintessence of Omega’s modern watch design ethos. It can trace its legacy back to 1993 when it was released, but most people associate the model range with Pierce Brosnan’s James Bond. His was blue though, and this is green.
In 2018, Omega revamped the Diver 300m line, beefing up the case, and showing off its full ceramic capabilities with a laser-etched ceramic dial and ceramic bezel. In so doing, it expanded on the color offering of the watch which previously had really only been seen in blue or black variations (with some deviation along the way). We saw the introduction of a white dial version with a black bezel, and a silver dial version with a muted blue bezel to go along with the mainstays.
The white dial model became a cult hit and an Instagram darling. It was just written up by the esteemed Jason Heaton, and our own Cole Pennington reviewed it for A Week on the Wrist. But for the most part, everyone thought that was it for that collection. We wouldn’t see anything new out of the Diver 300m line unless Omega made drastic changes to the watch or released a new reference. How wrong we were.

Blinded by Moonshine, and distracted by a Crayola crayon box of Aqua Terras, Omega came in to fill the void once occupied by the Rolex Submariner “Hulk.” Not to get too nerdy, but if the Rolex is the Bruce Banner Hulk, then let’s give Omega the Lou Ferrigno David Banner moniker.

I actually would prefer we not give this watch a nickname it doesn’t need, but rather look at it for what it is: A well-loved Omega dive watch in a color that happens to look fantastic.
If there’s one thing about the latest blue Seamaster Diver 300m, it’s that the blue color is over-saturated. It’s almost comically blue where its historical predecessors featured a more grey-blue aesthetic.

With this new green model, Omega made sure to keep the colors muted with a dark, almost forest green look that is matched from bezel to dial. It is so dark a green that in some light it almost comes across as black. It’s a colorful watch for those a little nervous about getting a colorful watch.

And that idea plays into the stylistic minutiae, as well. On basically all of the steel Diver 300m models (save for the blue and grey), the Seamaster wordmark is done in red, as is the second hand. While that adds a bit of contrasting fun to the design, it also makes the watches feel almost too playful at times. Compare that to the larger ceramic models, or the two-tone variants and you’ll notice that those watches feel a bit more mature because the red isn’t there.
And you won’t find it on the green model either. All of the dial text is white, including the Seamaster wordmark, and the seconds hand. By choosing this specific colorway, and doing away with the red flourishes, Omega made a watch that feels more mature, even if it’s effectively the same design as its counterparts.

In keeping with tradition, the watch is being released both on the classic stainless steel bracelet with the alternating polished center links, or a rubber strap in a matching green that complements the watch.

There’s nothing new in the form or function of either the bracelet or the strap, but I will say that the strap option would be my pick with this one.
There truly were an absolutely unwieldy number of Omega watches announced in the last three weeks. But even with the dust settled – no matter how much I want to get in line tomorrow for a MoonSwatch – I still can’t get this green Seamaster off my mind.

You’ll have to let me know if I’m crazy for talking up a color update of a watch this much, or if you agree with my take. One thing’s for sure, you won’t change my mind.