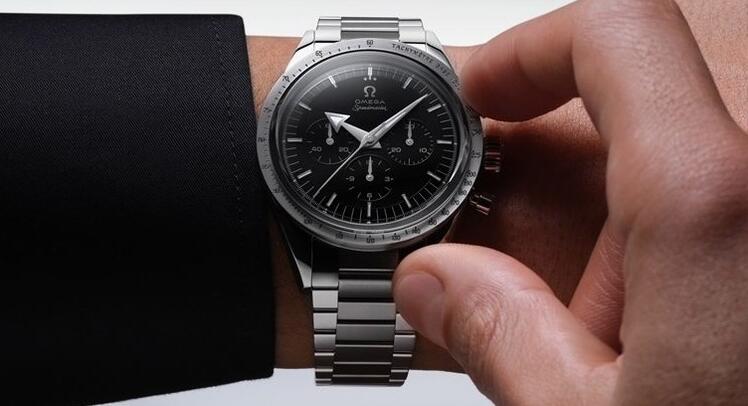 Omega isn’t wasting any time making big moves in 2022, marking the first Speedy Tuesday of the year with a brand-new release — the Speedmaster Calibre 321 in 18K Canopus Gold. An exciting new take on the classic chronograph mixing modernity with vintage touches. And by pairing the sporty dial with a luxurious gold case and bracelet, this new Speedmaster Calibre 321 model represents a new direction in dress watches.
Introduced in 1957, the Omega Speedmaster ref. CK2915-1 was initially conceived for racing drivers. The chronograph display was readable and easy to use (it was the first Chrono to feature a tachymeter scale on the bezel instead of the dial). It was such a trusty timepiece that NASA took it off the track and to the moon!
The new Omega Speedmaster Calibre 321 in 18K Canopus Gold celebrates the Speedy’s 65th anniversary by taking inspiration from that first model. Vintage veracity comes from its 38.6mm case and deep black dial with an applied vintage OMEGA logo and typography featuring an oval “O” — a detail featured in the first CK2915 models. Other throwback touches include 18K white gold hands and indexes, three iconic Speedmaster subdials (a small seconds display, and 30-minute and 12-hour counters), and a central chronograph function.
Of course, the famous tachymeter scale is present. In this case, the bezel is filled with black “Grand Feu” enamel. And as an Easter egg for collectors, you’ll find even more tributes to the original Speedmaster: the famous dot over the ninety marker (DON) and a dot placed diagonally to the seventy. And those in the know will appreciate the appearance of the NAIAD symbol (used to reference water resistance in some of the first CK2915 models) on the watch’s crown.
Omega famously resurrected the Calibre 321 in 2019, carefully replicating its original specs. Assembled by hand in a dedicated atelier, the movement replicates the same look and design of the original but with a few updates. Mainly, the Calibre 321 still runs at 18,000 vibrations/hour but now has a 55-hour power reserve.
It’s nice when a brand can honor its past while facing the future. In the case of this Speedy, the most notable upgrade is the use of bright, white 18K Canopus Gold for the case and bracelet. This material is Omega’s exclusive white gold alloy. Visually, it imparts a look that’s more luxurious than stainless steel without feeling out of place with the watch’s sport-chic aesthetic (what’s not to admire about the lumed ‘broad arrow’ hands and the way the pushers and crown dynamically explode out of the case?)
The hands and indexes also get the Canopus Gold PVD treatment. The Speedmaster Calibre 321 comes set on a brushed and polished, 19mm wide flat link 18K Canopus Gold bracelet with a very of-the-moment comfort release adjustment system.
The watch has a sapphire crystal display case back to admire the exemplary Calibre 321 movement, with the brand’s signature Seahorse etched into the inside of the glass. The seahorse’s eye is composed of a brilliant blue sapphire, a precious stone that traditionally marks a 65th anniversary.
For collectors, Omega Speedmaster Calibre 321 is presented in a special wooden box that pays homage to the original case that customers would have received in 1957. And as a final surprise for fans, the Speedmaster Calibre 321 is not a limited edition, although due to its handcrafted movement, it won’t be in mass production either.