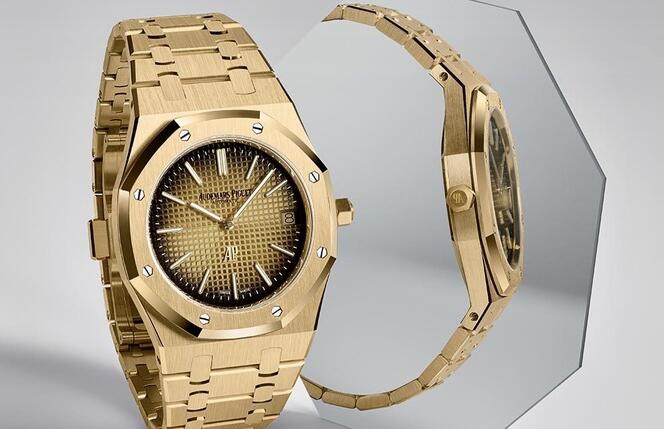 So it begins. Audemars Piguet has kicked off its Royal Oak 50th anniversary celebrations by announcing an array of new releases that honor the legacy of Gérald Genta’s game-changing design from 1972 and set a steady course for the future of this watchmaking icon.

In fact, in a private, virtual press viewing of the new releases yesterday, Audemars Piguet CEO François-Henry Bennahmias commented that this was only the beginning of the Royal Oak 50th anniversary celebrations. Additional new releases and more events are scheduled throughout this year More specifically, the releases announced yesterday feature new movements and fresh design tweaks that have been more than four years in the making and improve the collection’s overall look, performance, and wearability. Let’s take a look!
Firstly, Audemars Piguet has announced a new 39mm Audemars Piguet Royal Oak “Jumbo” Extra-Thin, ref. 16202, featuring AP’s new self-winding Calibre 7121, the first movement upgrade since the Jumbo’s launch in 1972. It replaces the Calibre 2121, finally retired at the end of last year.The collection comprises four models, each in a case material that has historically played their part in establishing the Royal Oak as an icon: stainless steel, 950 platinum,18K pink gold, and 18K yellow gold.

Each has a sapphire caseback affording views of the new mechanism decorated with Geneva waves as well as straight- and circular-graining. Moreover, it features the 50th-anniversary oscillating weight in 22K gold, treated to match the hue of the case material. The new calibre is just 3.2mm thin, allowing for a case thickness of just 8.1mm. And compared to its predecessor, the 7121 has a bigger, bidirectionally-wound barrel offering a longer power reserve (now 55 hours instead of 40 hours). Plus, the driving stem has a rapid date-corrector.

According to Michael Friedman, Audemars Piguet’s Head of Complications and a brand historian, the 7121 offers a more contemporary movement architecture. The original Jumbo’s aesthetics are honored, too, starting with the tapisserie dial available in Bleu Nuit Nuage 50 (steel edition), smoked grey (pink gold edition), or smoked yellow-gold (yellow gold edition). Meanwhile, the platinum edition has a radially-finished smoked green dial. The lume-filled baignoire, or bathtub-shaped, hour markers and hands are also carried over from the original 1972 model. As too are the polished gold applied AP monogram at 6 o’clock and printed “Audemars Piguet Automatic” at 12 o’clock. Likewise, the “Swiss Made” marking – which replaced “Swiss” in the 1980s – stays at 6 o’clock. In addition to the new ref. 16202, the brand has also unveiled a new 39mm Audemars Piguet Royal Oak “Jumbo” Extra-Thin Openworked, ref. 16204. Coming in a stainless steel or pink gold case, it houses a Calibre 7124, Audemars Piguet’s new dedicated extra-thin skeletonized movement.
The more exciting news is that several 34mm, 37mm, 38mm, and 41mm Royal Oak models have undergone, in the words of the brand, a “design evolution” in terms of their case, bracelet, and dial.

We’ll look at the models by their aesthetic updates a bit later, but first, let’s take a look at the subtle yet perceptible design tweaks undertaken to improve the Royal Oak’s ergonomics and give it a more contemporary look. Firstly, the bevels adorning the top and bottom of the case are now bigger, giving the watch a more slender appearance and increasing the play of light reflecting off them. While, simultaneously, the caseback has been integrated more into the case middle to sit better on the wrist. Additionally, the first four links of the integrated bracelet are now trapezoidal, increasing the bracelet’s taper. And throughout the bracelet, the links are thinner and lighter for added comfort. As for the hour markers and hands, Audemars Piguet harmonized their sizes. Plus, the applied AP monogram and the printed “Audemars Piguet” at 12 o’clock have been replaced by a gold, three-dimensional “Audemars Piguet” signature.
The first watches to bear the new design aesthetic are the self-winding hour, minute, second, and date models in 37mm stainless steel or pink gold cases, some diamond-set. They feature the brand new self-winding Calibre 5900 and a range of colored tapisserie dials, now with minute track on the tapisserie itself rather than on the flat external zone Similarly, the fresh look can be seen on the new 38mm self-winding chronographs featuring the Calibre 2385 and the 41mm versions housing the Calibre 4401, the latest-generation flyback chronograph movement introduced last year. Also powered by the 4401 are two new 41mm self-winding chronographs in frosted 18K white or yellow gold, accompanied by a grande tapisserie dial matched to the case’s hue and contrasted by black counters. Additionally, for all these new date and chronograph references, the proportions of the hour markers have been standardized according to the different case diameters.
The stainless-steel case of the first 41mm Royal Oak Self-winding Flying Tourbillon Openworked also features the refined case design. It houses the brand’s first-ever openworked self-winding flying tourbillon movement, Calibre 2972. Meanwhile, the dial and case of three new 41mm Royal Oak Self-winding Flying Tourbillons – available in stainless steel, titanium, and 18K pink gold and equipped with Calibre 2950 – also benefit from the case and dial makeover.
And regarding the last Royal Oak, for now, that is, Audemars Piguet has slightly evolved its 34mm Royal Oak Self-winding in black ceramic. Meanwhile, the case’s design remains unchanged. However, its black dial benefits from the new Royal Oak dial design. Finally, in non-Royal Oak news, Audemars Piguet has announced two new 41mm tone-on-tone Code 11.59 by Audemars Piguet models in 18K white and pink gold and paved with 1,085 brilliant-cut diamonds totaling 4.99 carats. Last but not least, there is also a new Code 11.59 Perpetual Calendar that pairs an 18K white gold case and blue aventurine dial with a matching textured rubber-coated strap.
According to Bennahmias, Audemars Piguet aims to make and sell 50,000 watches this year across all its collections, all the while looking to lure in more millennials and Generation Zers, an important clientele base for the brand in recent years.Bennahmias has also pledged to make the new Royal Oak models available worldwide in Audemars Piguet Boutiques and Houses and via its retail partners and not just to existing clients but also to new customers wishing to buy their first Audemars Piguet timepiece.