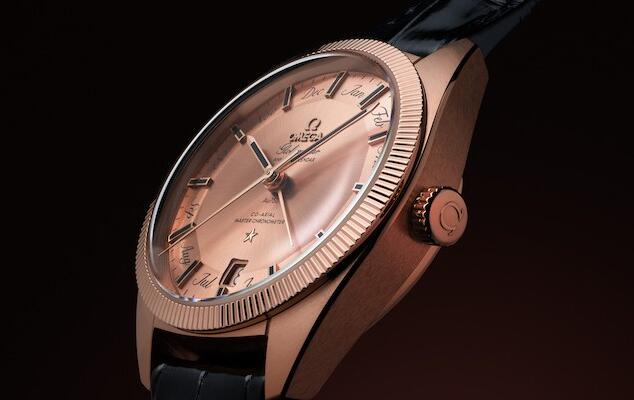 Omega is enriching its Globemaster line with three new refined timepieces offering the Annual Calendar function.
Common features of the 2021 Globemaster Annual Calendar models are the 41 mm case with fluted bezel, the signature pie-pan dial inspired by the very first Omega Constellation watches released in 1952, and a Master Chronometer certified movement.
On each facet of the dial, positioned between the indexes, the months of the year have been elegantly written. The current month is indicated by a thin hand that moves forward with an instantaneous jump. The polished hour and minute hands are coated with Super-LumiNova, also used for the indexes.
The first model (ref. 130.33.41.22.10.001) comes in stainless steel with a hard metal (tungsten carbide) bezel for extra strength and resilience. It features a sun-brushed green dial with 18K white gold used for the facetted hands, Omega logo, indexes, and Constellation star. The watch is matched to a green leather strap and driven by the Omega’s Co-Axial Master Chronometer Annual Calendar Calibre 8922, a self-winding movement resistant to magnetic fields reaching 15,000 gauss thanks to its free-sprung balance with silicon balance spring. The two barrels mounted in series guarantee a power reserve of 55 hours. Finishes include a rhodium plated rotor and bridges with Geneva waves in arabesque
The second model (ref. 130.23.41.22.11.001) is presented with a stainless steel case and a polished bezel in 18K Sedna gold, Omega’s proprietary red gold alloy. This is the same gold used for the crown, as well as the details on the sun-brushed burgundy dial, including the facetted hands, Omega logo, indexes, and Constellation star. The design is completed by a burgundy leather strap and the movement the same Calibre 8922
Finally, we have a model (ref. 130.53.41.22.99.002) entirely crafted from 18K Sedna gold. Gold is also used for the dial and several of its details, including the Omega logo, Constellation star, and the indexes. To create a striking contrast with the background, black onyx has been used for the index settings as well as for the hour and minute hands. Worn on a glossy black leather strap, this model is powered by the Omega Co-Axial Master Chronometer Annual Calendar Calibre 8923 which differs from Calibre 8922 for the special luxury finish with 18K Sedna gold rotor and balance bridge
The caseback of the Globemaster Annual Calendar reveals the Central Observatory medallion set on the scratch-resistant sapphire crystal, a tribute to Omega’s history of precision records and achievements in the early 20th century.
Swiss luxury watchmaker Omega has added three new models to its Omega Globemaster Annual Calendar collection. The new timepieces resemble the aesthetic codes of the original Globemaster line that was released in 2015. During the same year, the 2015 collection was also the first in the world to be given the Master Chronomaster certification.

The three new models are in 41mm and Omega aficionados will be quick to notice signature details such as the fluted bezel and a pie-pan dial. The dial is a nod to the manufacture’s Constellation watches released in 1952.