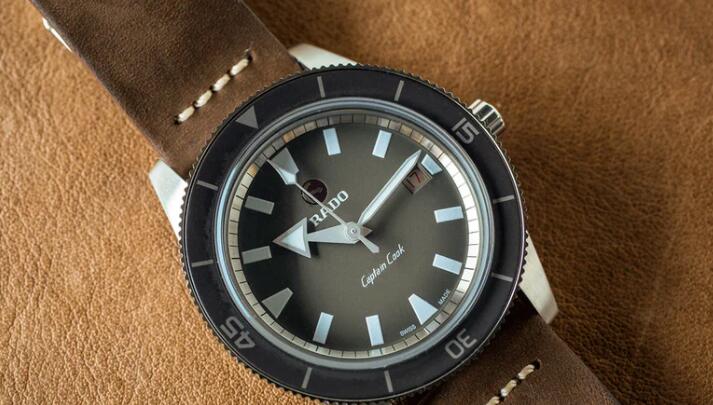 In the ‘60s, it wasn’t uncommon for watch companies to try to be everything to everyone. Take a look at the lineup from many mid-range Swiss watch companies during that era and you’ll find that many companies had at least attempted a dive watch, be it a serious hunk of a steel-cased diver with 300m of more of water resistance or a skin diver. Rado wasn’t any different. Though they typically made dress watches, from 1962 to 1968 Rado produced the Captain Cook, named in honor of the 18th Century explorer Captain James Cook. The watch was a proper dive watch with a Brevet (patented) case lending roughly 200m of water resistance, according to an article published in 2003.

Rado initially brought their historic ’60s Captain Cook back in 2017 with an almost 1:1 reproduction complete with faux-patina lume, but “hyperchrome” was added to the name. The watch retained its 37mm case size, and even the small touches like the red numerals on the date wheel and spinning anchor in the logo present at 12 o’clock were replicated.

The release caught the industry off guard – the Swatch brand known for thin ceramic watches, and exotic technical case materials, went in a totally different direction with the Rado Captain Cook Hyperchrome, and the community loved it. It even landed on Jason Heaton’s list of the 10 best dive watches of that year. Naturally, Rado ran with the model, and there have been a number of follow up editions. One is based on an execution that appeared late in the production run, when cushion cases were starting to grow popular.

And now they’ve made an edition of the watch that feels entirely modern, almost like it could have been designed from scratch in 2019. The newest addition to the Captain Cook lineup is dubbed the  “Automatic,” and it’s 42mm wide. It comes in five colorways: Green, navy blue, the grey you see pictured here, black, and there’s also a vintage-inspired edition in the line-up, just like the 2017 release, except in 42mm. Reading the comment section on the original Introducing post, it was clear that there was a demand for a larger Captain Cook. Then a version in 45mm was released. Enthusiasts wanted a model somewhere in between. Well, here it is.

The colorway I think is most interesting is this grey model, a completely new look for the watch. With the muted grey dial serving as a backdrop to the toothpaste-white markers, it makes for something subtle yet highly legible. There’s visual continuity here, with both the bezel and the dial devoid of any sort of Hyperchrome finishing – instead there’s a very subdued matte finish.  Part of what made the 2017 release so charming was the vintage vibes and general element of surprise that this was a Rado. That charm-fueled novelty just isn’t sustainable after a few releases, and this iteration of the watch really exemplifies how an old design can genuinely be updated into something new and novel. On the caseback, however, you will indeed find the triple-seahorse motif straight from the original. That’s sacrosanct. It just wouldn’t be a Captain Cook without it.

The bezel and color tone of the dial also hint at the mastery of ceramic manufacturing that Rado has achieved. This feels more like a Rado; the Hyperchrome moniker is absent,  and there’s nary a shiny surface on it. In that sense, it gives off a very tool-watch appearance. All the makings of a proper dive watch are there, with the new Automatic – 200m water resistance, a ceramic bezel with smooth and tight action, and a highly legible dial. The short lugs manage to allow the Captain Cook to wear smaller than a typical 42mm case, as it keeps the case close to the wrist without protruding lugs. Sometimes certain case dimensions and proportions can’t really be scaled up (or down); some cases just work at a certain diameter and wouldn’t work at others. After significant wear, the 42mm case certainly feels well-balanced and well-proportioned. I wore it on a leather strap, but an execution on a beads of rice-style bracelet is also in the lineup. Both watches are offered at a reasonable $2,000.

Rado might not have the garnered the sort of clout in the dive watch category throughout the decades as other brands, but if this were one of the other Swatch group manufacturers, the watch might be positioned at a significantly higher price point. The C07.611 movement has been used in previous executions of the watch, and it’s still a strong selling point, with a commendable 80 hours of power reserve.

2017 saw a handful of manufacturers re-introduce heritage models that replicated the original design almost 1:1. The Captain Cook was one of the more thoughtful and well received watches. Now with the new Rado Captain Cook Automatic Rado is showing us how to take a heritage model and open it up to a wider audience outside the vintage-obsessed niche. This time, its novelty lies not in its ’60s roots, but instead in its modernity.