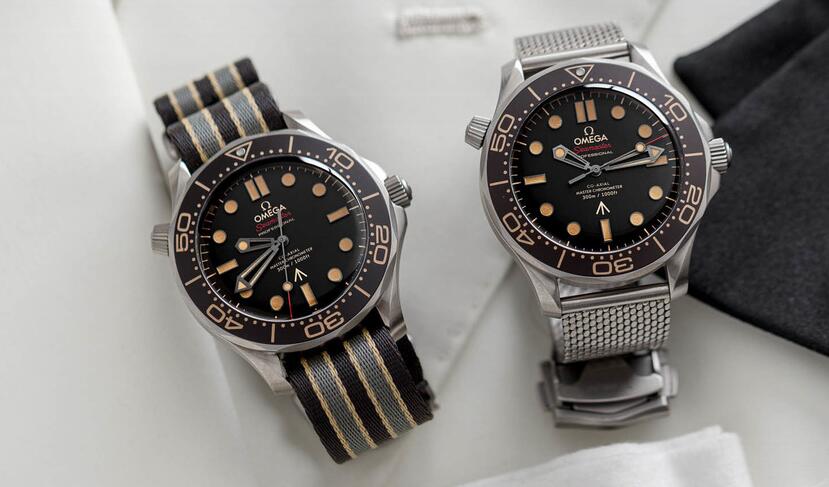 Although delayed until November, the upcoming James Bond film, No Time to Die, marks Daniel Craig’s last outing as the super spy, but it’s certainly not the end of the franchise. Bond is timeless because he is suave, sexy and stylish. In fact, anything associated with 007 instantly becomes iconic.
Especially his watches. Who will next don the Bond moniker is a mystery, but to commemorate the passing of the famous spy torch, Omega and Watches of Switzerland Hudson Yards are hosting a month-long pop-up event that embraces the past, present, and future of the franchise.
If you are looking for Instagrammble moments to show your 007 devotion, Omega is taking over the lobby area and primary display window of the Watches of Switzerland Hudson Yards boutique.
The exterior window prominently features a freestanding gold-wrapped 007 logo, and is flanked by additional Bond paraphernalia. The lobby of Watches Of Switzerland Hudson Yards is home to a freestanding, 3-D 007 logo. As far as photo ops go, the Hudson Yards store would make an excellent location for a Bondian chase scene. Start at the top of the vitrine and parkour on down to the main floor before you make your way across to Watches of Switzerland.
We definitely thought about cosplaying for this event. But which watch to wear? We recommend either the Omega Seamaster Diver 300M Co-Axial or the Omega Planet Ocean 600M Co-Axial that Daniel Craig wore in his first outing as Bond, James Bond.
No Time to Die marks Craig’s fifth outing as Bond. And the Omega/Watches Of Switzerland pop-up offers a fun retrospective of unforgettable movie moments and gadgets that the famous spy used.

But the main attraction is the watches. All are displayed in four, gold-wrapped vitrines containing classic Omega watches.
For not-so-undercover Bond watch fanatics, the event also provides the chance to pick up the new Seamaster Diver 300M 007 Edition. Omega collaborated closely with Daniel Craig to create this Q-worthy timepiece. Made from lightweight Grade 2 Titanium, this Seamaster features a titanium mesh bracelet, military-style engravings, and a vintage-looking “tropical” brown aluminum dial and bezel.
An Omega watch has been worn on the wrist of James Bond in every film since GoldenEye in 1995.

To celebrate this silver anniversary, the manufacture also recently released a box set, of sorts: the Seamaster Diver 300M James Bond Limited Edition Set. Only 257 of these sets were made. The box is a “Globe Trotter” suitcase with black and grey NATO-inspired straps. Packed inside are two unique watches. One features a stainless steel case with a black ceramic bezel, white enamel diving scale, and black rubber strap. The other is an 18K yellow gold, plate engraved with its Limited Edition number.
The second model has an 18K yellow gold case and black rubber strap with an 18K yellow gold buckle. On this version, the Limited Edition number is in 18K white gold, and the black ceramic bezel features a diving scale in Omega Ceragold.

Both timepieces have spiral-brushed black ceramic dials and a special black PVD coating. But the most intriguing touch is its laser-engraved, gun-barrel motif. The gun barrel sequence is the signature of every Bond film and was originally created by film title designer Maurice Binder.
There is also a hidden number 50, referencing the half-century anniversary of On Her Majesty’s Secret Service (1969), in the Super-LumiNova of the 10 o’clock index.

There are even more Easter eggs for devoted sleuths: the 12 o’clock marker was inspired by the Bond family coat-of-arms and the crest also appears on the sapphire crystal caseback.
For those who obsess over watches, the Omega Seamaster Diver 300M James Bond Limited Edition is equipped with a Master Chronometer Calibre 8806/8807. Plus, owners will receive an additional stainless steel bracelet, as well as a NATO strap for each model, with buckles in matching materials. Don’t miss the opportunity to visit the pop-up that started on Tuesday, March 3rd (fun fact: March 2nd marked Daniel Craig’s 52nd birthday) and runs until Monday, March 30th.