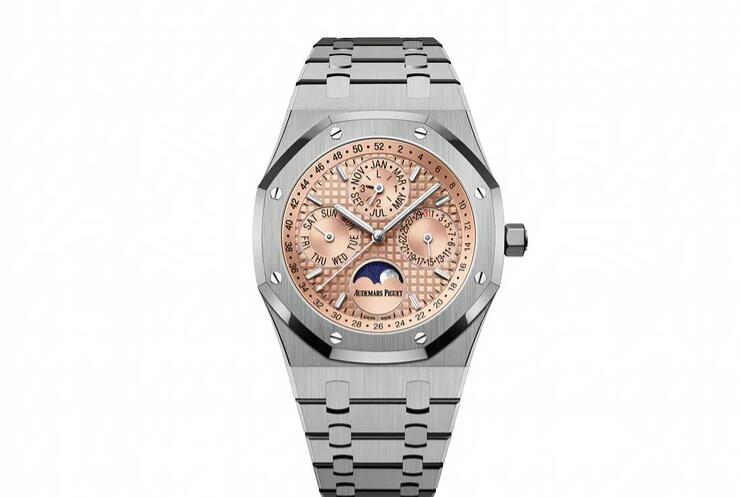 This one’s more about what we don’t know, or at least didn’t. A limited-edition Royal Oak Perpetual Calendar on global release is the kind of watch that should have the rafters echoing with the clamoring of the faithful, but this one appears to have slipped all but unnoticed to the foot of the parish newsletter.

The first 150 pieces were reserved for the Japanese market, and the first 100 of those were sold exclusively through the venerable retailer Yoshida. And perhaps because travel to Japan these days is off the cards for much of the world, the international watch community seems to have missed it. If my experience researching this one is anything to go by, Audemars Piguet’s local teams appear to have been unaware until now, too, so let’s not beat ourselves up for missing it.
Even now, AP is coy about when exactly the shackles came off, but it appears the remaining 150 pieces became available to the rest of the world a few weeks ago, slipping into the US at $85,100. These being high-end pieces assembled by an elite group of AP watchmakers, they won’t exactly fly out of the Le Brassus factory, so the next batch is likely to trickle through slowly.

Anyway, the watch is on our radar now. So what do we know of it? Well, at a basic level it’s an AP Royal Oak Perpetual Calendar, a familiar enough piece, only now with a salmon Grande Tapisserie dial and subdials, and a titanium case and bracelet.

Dial side, that means day, date, week, month, astronomical moon, leap year, and hour and minute indications. No seconds – the long, slender central hand points to a week scale. Under the dial, the mechanism is the independent company’s Calibre 5134, which debuted in 2015 (and is built atop the caliber 2120, launched in 1967 and still the thinnest full-rotor automatic winding movement in the world). It has a 40-hour power reserve that beats at a reassuringly calm 19,800vph. The whole package is 9.5mm front to back, delivering the Royal Oak QP’s water resistance of 20 metres, a figure barely worth mentioning but for the sake of water-bound owners who thought they had a lightweight sports watch on their wrist.
Country-specific limited-edition versions of the Royal Oak Perpetual Calendar aren’t new, and nor is AP’s practice of releasing them on the quiet. Recent LEs such as the 88-piece titanium Ref. 26609TI.OO.1220TI.01 for the Chinese market and the stunning platinum, black-dialed Ref. 26597PT.OO.1220PT.01 that ran to just 20 pieces for Japan were dropped with barely a whisper. Same goes for sister pieces created of late for Thailand, Latin America, Hong Kong, China, Indonesia, and the UAE. A number of those, by the way, have since found their way onto the pre-owned and auction markets.

The big difference here seems to be the volume. None of the above ran to more than 100 pieces, and, so far as I can glean, none was issued to the rest of the world after the initial period of exclusivity. That makes this 300-piece edition a different animal, and in a sense, makes the 150 pieces now available outside Japan a run in their own right. Although – and again, from what I’ve been able to deduce – there are no distinguishing characteristics to separate the two halves of the run. They’re not even numbered.

Assuming the plan was always to split the 300, perhaps that’s why the aesthetic is less abrasive than was the case with some of the previous limited-edition models listed above. The Thai edition had a fierce red dial with black and white subdials, and the Hong Kong a spruce green dial with a yellow week central hand, while the heavy contrasts of the “Ice Blue” edition, as some have called the Swiss piece, jar with this reviewer.
This new edition, by contrast, is a more palatable mix of a titanium case and bracelet with a salmon dial, an increasingly common tint also used by AP in the limited-edition Jumbo of 2019 (although arguably that was more honey-colored) and by others, including Patek Philippe, Montblanc, and Breitling. As a result, you could probably look at this watch and feel you’ve seen it before. We blinked twice, it must be said.

Bigger picture, AP’s decision to devote a significant chunk of its Royal Oak QP production to limited editions is interesting. François-Henry Bennahmias, the company’s chief executive, claims these days only 1.5 per cent of the company’s watches are limited-editions, down from 15 per cent in the mid-2000s. A tight handle on inventories has become one of AP’s signatures under his stewardship, and no doubt the spreadsheet’s smaller for a model like this.

As that may be, the secret’s out, the watch is here, and in the eyes of this beholder it’s really rather beautiful.