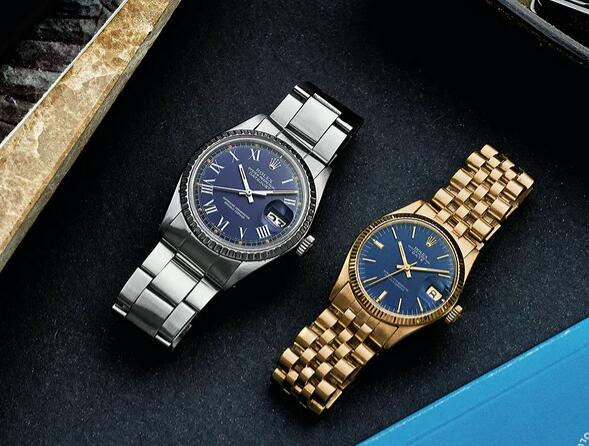 A great vintage watch, or any watch at all, is one where you linger after putting it on your wrist in the morning. It’s not the same as a T-shirt that you can throw on and immediately move to the next thing; a watch that inspires you earns a extra glance. It might be the recessed lume plots of a Rolex ref. 1016 Explorer one morning. And the next it could be the slight seam between the dial and the graduated tension ring of a manually-wound Heuer Carrera.

The selection of vintage watches hitting the  Shop each Wednesday is built around appreciating those lasting moments of admiration. We won’t offer a watch if we don’t look at it the same way. To reference Marie Kondo, these vintage pieces “spark joy.”
Four watches are explained in depth below, but as always, click through the slideshow above and head over to the Vintage Watches section of the Shop for the full drop. A Tudor Ranger from 1967, a second-execution Heuer Carrera, and a couple of Rolex Oysters caught the eyes of various members of the vintage team this week.

If there’s another watch from this week’s selection that’s worth taking a longer look for you, let us know in the comments.
What are the first things you imagine when you think about the color blue? Is it the sky or the ocean? It is often cited as one of the most popular colors, and it has an association with calmness and peacefulness. When it comes to watches, it is often chosen as an attractive alternative when black, white, or silver seems too “traditional.” Just as green dial watches are the thing as of late, blue dials appeared to be the choice many companies during the 1970s from dress watches, like Patek Philippe’s Golden Ellipse, to professional tool watches, like the Omega Seamaster “Big Blue” ref. 176.004.
The Datejust we have today is a rather funky rendition of the model. Usually, the Datejust is known for simple baton indexes, but instead, this example is adorned with prominent painted Roman numerals, referred to as a “Buckley” dial by collectors. The blue dial on this watch has a hint of a grape-purple undertone, which vintage blue dials can sometimes turn into. You’ll also find this transition of the dial color on the likes of certain vintage Submariners with blue dials that have patinated in varying degrees. On this watch, there’s also the lovely creamy lume plots, which serve as attractive accents, and an engine-turned bezel for added dimension.

On the other hand, this mid-sized Date is elegantly finished inside an 18k yellow gold case and paired with the famous fluted bezel and Jubilee bracelet, bringing extra presence beyond its 31mm diameter. The sunburst finish on the dial brings out the rich blue and is enhanced further by the warm patina on the gold case and the bracelet. The white hour markers framed in gold along with the gold luminous hands and the warm orange patina on the lume plots have a similar stunning effect as seen on the Buckley dial above.
The Rolex Date and Datejust models have been a mainstay in the company’s catalog for decades; they serve as the perfect foundation for showcasing a beautiful blue dial. Blue hued watches present well in any setting. They’re serious enough for daily wear but add just enough flair to set you apart. Almost 45 years later, both of these watches are even more beautiful after standing the test of time. Take a spin through the Shop for all the specs on both.
The Tudor Ranger is a special thing. Where the other renowned vintage Tudor – the Submariner – is essentially just that, a Submariner, the Ranger is something completely different. Some may look to Rolex’s Explorer as a counterpart, but in the metal, the two are surprisingly different.

Look no further than this week’s vintage selection for an Explorer from big brother Rolex, albeit three years earlier. Handling the two watches side-by-side and, admittedly, wearing the two on opposing wrists, reveals the subtle – yet impactful – differences. Beyond the 2mm smaller case diameter, the Tudor Ranger wears much lighter than its Rolex contemporary, with a thinner bracelet and a slimmer case.
The handset here is what I keep coming back to. Many refer to the hour hand as a “shovel” which is fairly apt but I see more of a snake or even turtle head in its shape, regardless of the name, it has a great look. Constantly sweeping around the dial is a paddle-shaped seconds hand. The lollipop seconds hand is a touch tired in my eyes, while the Ranger’s seconds hand is unlike anything else you’ll find in the Oyster case family. To me, the Ranger is the perfect encapsulation of Tudor in the vintage era.

It is easy to look at the Tudor Submariner and write off the brand as Rolex derivative, with an off-the-shelf movement inside and a tweaked hand-set. The Ranger says that our immediate notion is wrong; there is real history here, real design chops – this is a watch that begs you to dig deeper into the mid-century Tudor catalog, in search of more hidden gems.
During its production years, Tudor watch offered the Ranger with and without a date complication and with both a manual and automatic movement. Also varying on the Ranger was the logo which started as the Rose logo before transitioning to the Shield logo, as did the brand.

Today’s example is one of my personal favorites. The date window and cyclops lens at three o’clock create a nice counterpoint to the date-less Explorer. Hit the Shop, as always, for all the details.
If you’re a watch collector who lives by the age-old adage, “Simplicity is the ultimate sophistication,” then perhaps the Carrera ref. 2447N will catch your eye. With a case and dial design so strong and iconic that its DNA has carried over to TAG Heuer’s contemporary collection, as well as a plethora of recent re-editions, this early 1970s example of the Carrera ref. 2447N “Second Execution” with a black dial would be the perfect watch for getting back to basics.
With a contrast-filled dial accented with white paint and no tachymeter in sight, it’s no secret that legibility is the magic word here, both in the Carrera’s conception and its enduring popularity.

The sub-dials and tension ring with one-fifth second markings do so much of the talking here – and with a chronograph, isn’t that exactly what you want?
The classically proportioned 36mm case seen on today’s example is simply something you don’t come across too often these days, plus it fits like a dream on both larger and smaller wrists, alike. Under the hood is the famed manual-wind Valjoux 72 chronograph movement, Heuer-signed and all. It just doesn’t get any better than that.