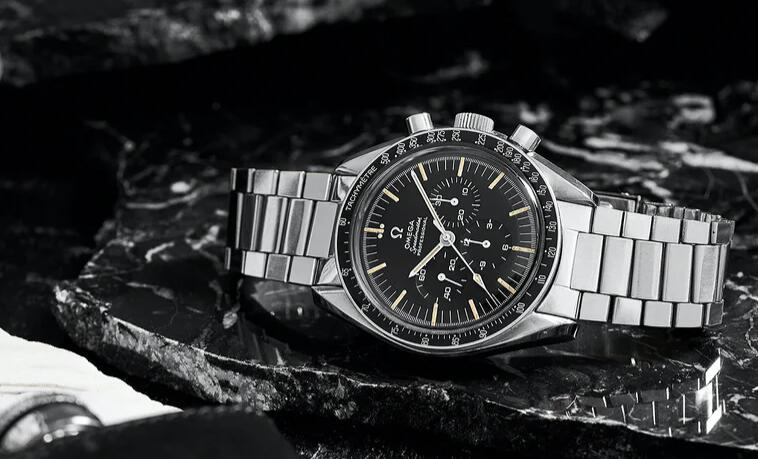 Speedmaster, Polerouter, Carrera, Submariner, and Santos. There are watches in the grand scheme of vintage collecting that just scream classic HODINKEE – and this week’s selection is chock-full of them. These are the kind of watches that were best shown in a 2012 wrist shot with the streets of New York City in the background, maybe a yellow taxi and a camel overcoat creeping into the frame before meeting a nice neat stack of sweater, oxford cloth button-down shirt, and wrist. If not there, these watches are on a hand gripping the steering wheel of a vintage 911, with driving gloves either loosely worn or even thrown up on the dash. That is classic bestbuycheap.ru.
This is the clear theme in this week’s bunch. Having a “Pre-Moon” Speedy on bracelet, an early Heuer Carrera, and a Universal Genève Polerouter in the same vintage selection is not what we expect every week – let’s call it a curated, but happy, accident. Those three middle-of-the-order hitters are covered more in-depth below, while the full collection features a bit of a twist. It is no secret we are big fans of the Heuer Carrera “Dato 45” but here we have Omega’s take on a “Dato” in a De Ville with a date window within the running seconds sub-register. Others include a Rolex Datejust ref. 1603, an Aquastar Seatime, and a Zodiac Sea Wolf – all available through the carousel above. Hit the Shop for the full collection and scroll on for our picks.
Not many watches are tied to a particular moment in history. But at 10:56 PM ET on July 20, 1969, when Neil Armstrong became the first human to land on the moon and famously announced, “That’s one small step for a man, one giant leap for mankind,” this moment also changed the history of Omega and Speedmaster forever. Technically speaking, it was Buzz Aldrin’s Speedmaster which first made it to the moon since Neil Armstrong actually did not have his Speedmaster on his wrist when he stepped onto the moon’s surface. At the time, Commander Armstrong left his watch behind in the Lunar Module (“Eagle”) as the mission timer had failed earlier. Regardless of whose Speedmaster made it to the moon first, it’s an amazing story that these courageous individuals had such faith in a simple mechanical chronograph in an unknown environment.

Most astronauts on the Apollo 11 mission wore the ref. 105.012, except for Michael Collins who wore the ref 145.012, which is the same reference we have here. The ref. 145.012 was produced for a very short period between 1967 to 1969, and the basic Speedmaster design from this era has pretty much remained the same until today. As the saying goes, “why fix something when it’s not broken,” there is not much that has changed since then because there’s simply not much to be changed. But I must say that I have an affinity towards vintage Speedmasters. While it’s clear that this watch is not the watch that went to the moon, whenever I try one on my wrist, somehow I feel the weight of history – that this watch also could’ve gone to the moon makes it that much more special to me.
The notable details of the “pre-Moon” Speedmaster of this reference are well presented here, with a stepped dial with the applied Omega logo, the “dot over 90” bezel, the “pre-Moon” caseback with the Hippocampus logo, and let’s not forget about the caliber 321 movement inside. Plus, there’s the creamy patina and the nicely preserved bezel. But my favorite part of this watch is the “flat-link” bracelet. I’m all about comfort when it comes to bracelet designs; if it’s not comfortable, it ruins the entire wearing experience. There is something about the sleek look and feel of this vintage style that’s neat and brings everything together. The sculptural Lyre lug case and the angular “flat-link” bracelet sounds like diametrically opposed design features, since the case is all about the fine curvatures and the bracelet is all about geometric precision, but somehow they fit together harmoniously and become more than their sum.
I realized a couple of months ago, over five years into collecting vintage, that I only own watches with black dials. Completely naturally, I simply bought what I loved along the way and what I wanted to own. Regardless of how I got there, immediately upon this realization, my twisted collector and consumer mind rushed to figure out a remedy.The first watch that came to my mind was an early Heuer Carrera ref. 2447S. Jack Heuer’s initial Carrera design prioritized legibility and a clean aesthetic over anything else, leading to a silver dial that – in this iteration – is so expertly laid out even a black-dial lover could appreciate it. In all seriousness, this watch just does it for me. The outer tension ring with graduations for minutes and one-fifth of a second timing on the chronograph is truly one of my favorite details in all of vintage watches. Heuer took a necessary and often forgotten part of the wristwatch and utilized it to create one of the greatest chronograph designs of all time. It really is genius. This example is tough for me to see go – I guess I’ll have to wait for the next one. We can’t keep them all, or any of them really. With a strong case showing the subtle edge to the restrained Carrera lug design and an extremely pleasing patina to the lume, this is how we want to find them. Click through to the Shop now to snag this silver-dialed Carrera away from me as soon as possible – take me out of my misery, because this one is taunting me.
The Polerouter has to be one of the most talked-about vintage watches, and for good reason. For many, it’s the watch that gets them into the world of vintage, and for others it’s simply a staple in their collections. One of the great things about this model is how versatile it can be. Depending on strap choice, it can switch hit between sporty and dressy occasions – it really is a fan favorite.

We haven’t had one in the Shop for a little while, so when this one came across my desk, I got pretty excited. These are just beautiful, the black dial with the metal rehaut has such a great look! I am also a big fan of dauphine hands, they are just so classic looking. The cross-hair detail on the dial dividing it into quadrants is also a nice touch.
The example we are offering today is an early model with a bumper automatic movement under the hood. Universal Genève used the self-winding caliber 138SS in the Polerouter before the beloved microtor. Bumper movements have a different feel than conventional rotors and you can really understand this when you try to wind it up by going back and forth with one in your hand. In addition to the great dial details and the movement, the lyre lugs entice me every time. The curvature of the lugs gives the watch a nice presence on the wrist and makes us think of a watch that came after the Polerouter, the Omega Speedmaster Professional.