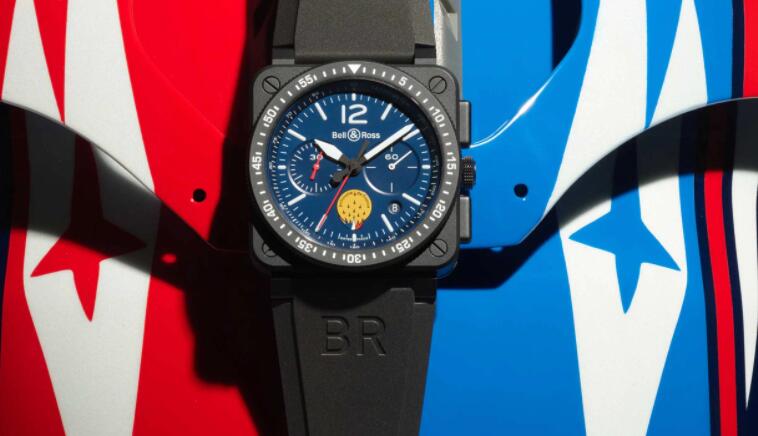 Every Air Force has an elite group of pilots who elevate flying to an art form: precision and grace at speed and altitude. The UK has the Roulettes, the US has the Thunderbirds, and the French have the Patrouille de France. For 67 years, this squadron has exemplified the skills of the French Air and Space Force, and this year, Bell & Ross is along for the ride, equipping the squadron with the BR 03-94 Patrouille de France.
No surprise that Bell & Ross has opted for one of the classics for this first edition. The square instrument-style case is at the core of Bell & Ross’ identity, and while they have other offerings, for this edition, it’s absolutely the right play. And it looks great. The 42mm black ceramic case wears big, thanks to the square shape and the wide strap (black rubber and fabric are included), and the elapsed seconds bezel and tachymeter on the flange adds a nice layer of technical function without the design getting too overloaded.And while it would have been easy for the brand to lean into the tactical design, the addition of the blue dial and red and white highlights (for that Tricolore vibe). Then there’s the Patrouille de France patch at six. A military logo on a dial is usually cool, but not all insignia are as attractive as this one. It shows the nine planets of the squadron — actually, it shows the older silhouette of the lovely old Fouga Magister, not the current Alpha plane — in their signature ‘Concorde’ formation, trailing French smoke against a gold roundel. Bell & Ross has always been a very graphic brand, and this watch epitomises this.

For me, this is Bell & Ross at its best — a well-executed partnership with a respected aviation group. Bonus points for the French tie-in.
Bell & Ross has dropped a black ceramic chronograph to mark its involvement with France’s national aerobatic display team.

The Franco-Swiss brand announced it had become the official watchmaking partner of the Patrouille de France earlier this year.

Bell & Ross have reflected the colors of the Tricolore using a blue dial (with recessed running second and 30-minute chronograph counter sub dials at the three and nine o’clock positions), white Super-LumiNova markings and red tipped chronograph hands while the Patrouille de France logo sits at the six o’clock position and is also engraved on the caseback.
As well as the 500-piece mechanical edition, Bell & Ross will be producing a near identical 100-piece limited edition using a quartz movement, which the pilots of the patrouille de France will wear.