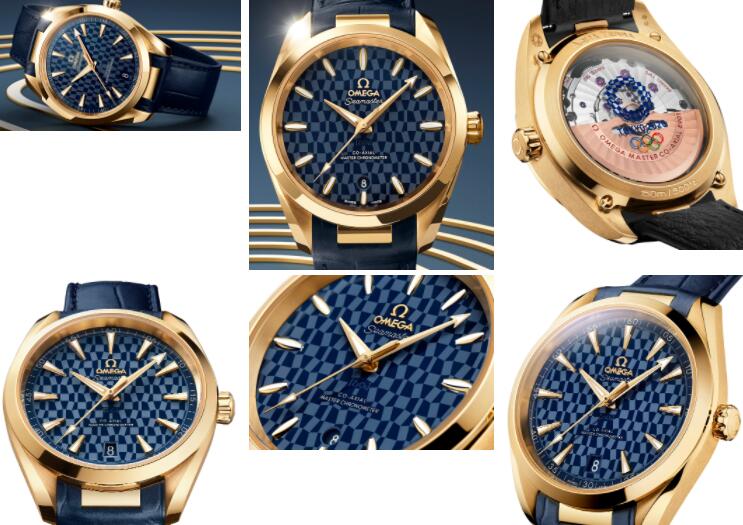 As the world heads deeper into mid-July 2021, the pandemic-delayed Tokyo 2020 Olympic Games are finally slated to begin on July 23rd. While this historic delay has kept fans across the globe from experiencing the athletic spectacle of the Olympic Games, official partner Omega has taken the past year to expand its range of Tokyo 2020-inspired designs. As the Olympic Games near opening day, the marque has debuted one final set of commemorative timepieces in its versatile Aqua Terra series. With the new Omega Seamaster Aqua Terra Tokyo 2020 models in gold, Omega brings a luxe touch to the dressier side of the Seamaster to kick off a truly historic Olympic Games.

Available in both 38mm and 41mm variants, the cases of these new Omega Seamaster Aqua Terra Tokyo 2020 models are rendered in 18k yellow gold. Both models share the standard Aqua Terra’s case form, with Omega’s signature twisted-lyre lugs and a broad sloping polished bezel. As a distinctive feature, however, both models sport a printed Tokyo 2020 Olympic emblem atop their sapphire display casebacks. Like the standard Aqua Terra, these models carry a sporting 150 meters of water resistance.

The starkest visual difference between the two versions of the new Omega Seamaster Aqua Terra Tokyo 2020 in gold is in dial design. Both models’ ceramic dials use the same laser engraved distorted blue checkerboard pattern, introduced in the stainless steel Aqua Terra Tokyo 2020. Although this distinctive pattern is drawn directly from the Tokyo 2020 Olympic logo, the aquatic context of the Aqua Terra line also gives this pattern the look of the bottom of a tiled swimming pool in initial images. Both models also share a gold set of the Aqua Terra’s dauphine and broad arrow handset, but take separate approaches for the applied gold indices. The 41mm variant takes a sharper, more aggressive approach, with daggerlike wedge indices and a trapezoidal date window at 6 o’clock. For the 38mm, Omega instead takes a softer and more feminine tack, replacing the applied wedges with rounded, lozenge shaped indices and reshaping the 6 o’clock date window into a circle. This smaller model also omits the outer minutes track for a cleaner, more minimal look that allows the etched pattern to extend all the way to the brushed rehaut.

Both versions of the Omega Seamaster Aqua Terra Tokyo 2020 in gold use similar in-house co-axial automatic movements. Omega equips the 41mm model with the 8901 automatic movement, while the 38mm model receives the 8801 movement. Both models share similar overall architecture and finishing, sharing an eye-catching bridge and rotor in the brand’s trademark Sedna gold alloy, along with Omega’s unique arabesque take on Côtes de Genève. The 8901 and 8801 also share Omega’s co-axial escapement design, and both are certified to stringent Master Chronometer accuracy standards by METAS. Where the two begin to differ slightly is the mainspring arrangement, as the 8801 uses a traditional single mainspring barrel while the 8901 opts for a twin barrel arrangement. In addition, the 8901 adds a jumping hour hand feature for easy time adjustment when entering a new time zone. Despite the added mainspring barrel, power reserve performance is surprisingly close between the 8801 and 8901, with the double barrel 8901 offering 60 hours of reserve at a 25,200 bph beat rate while the 8801 instead offers 55 hours of power reserve at a 25,200 bph beat rate. Both of these new models are fitted with a dressy fitted-end alligator pattern leather strap in navy blue.