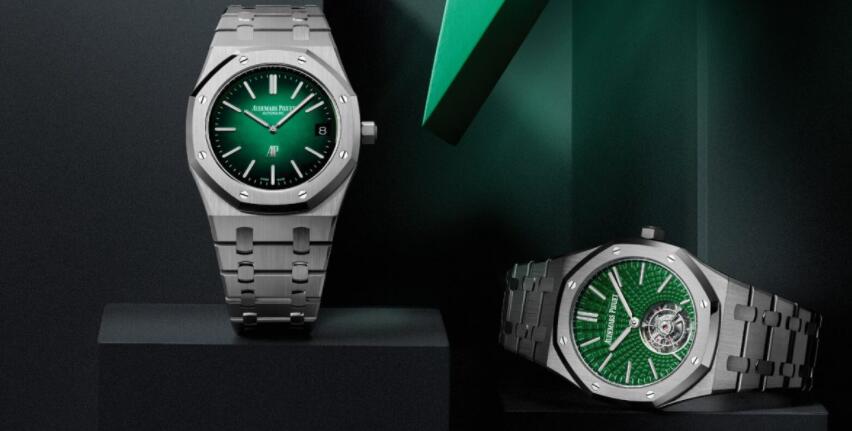 While many a watchmaker has been embracing green over the last couple of years, Audemars Piguet has only dabbled here and there, with a camouflaged Offshore here, hints of emerald there. Apparently though, the watchmaker has only been biding their time. For the makers of the Royal Oak, 2021 is the year of green with not just one but five pieces offering striking coloured dials – including one particularly special, non-limited Jumbo.
Audemars Piguet Royal Oak “Jumbo” Extra-Thin
The crowning glory of the new collection, the one that Audemars Piguet will not be able to produce enough of, is the new 15202 Royal Oak Jumbo. The brand’s 2019 boutique-only edition with its rose gold dial was snapped up lightning fast, and this version with its green fume dial I’d say is even more striking.

It’s the first 15202 ever with a green dial which should be enough to get collectors excited. Better yet, it’s an absolute stunner. A refreshingly minimal alternative to the collection’s signature grande tapisserie guilloche, the brushed, smoked look is an instant winner, bright but not too shiny, eye-catching but not ostentatious.

The case is 39mm of platinum, which in a watch of Royal Oak dimensions is a substantial chunk of precious metal. Fortunately, it lives up to the Extra-Thin moniker at 8.1mm thick, meaning it won’t weigh down dainty wrists too much. Equipped with the AP calibre 2121 with its 40-hour power reserve (and lovely decoration through the sapphire caseback), we can’t wait to see one of these bad boys in the metal. Yet while the 15202 might be next to impossible to nab for your collection, at least Audemars Piguet is expanding their green scheme elsewhere.
Audemars Piguet Royal Oak Selfwinding Chronograph
Particularly eye-catching is the new, green-dialled, yellow gold Royal Oak self-winding chronograph. It’s a more classic dial for the watch, meaning the usual grid-patterned Grande Tapisserie guilloche, just in a nice, forest green. It’s more about the contrast between the 41mm yellow gold case and dial rather than the green itself, but it’s a damn fine colourway if you want a big splash of gold on your wrist.
The watch is equipped with the calibre 2385 chronograph movement, with a 40-hour power reserve (which is fast becoming less than we’d like to see) and, along with the full gold Royal Oak integrated bracelet comes with green calfskin and green rubber straps. The images we have so far are just on gold, but I bet it looks fantastic on the leather. Not subtle, though, but then it is a full gold RO.

Unlike the Jumbo (thank god) the chronograph is a limited edition, specifically of 125 pieces, which is not much at all. Still, compared to the final three, that’s more than enough.
Audemars Piguet Royal Oak Selfwinding Tourbillon
The last envy-inducing timepieces come as a trio: three new variations of the Royal Oak Selfwinding Tourbillon. One of the two 41mm models comes in rose gold, two in titanium and one of those titanium models comes set with 32 baguette-cut emeralds between the bezel’s signature octagonal screws.

They all share a unique twist on the signature Royal Oak dial dubbed Evolutive Tapisserie, waves of rectangles emanating from the titular tourbillon at 6 o’clock. Of the three, I prefer the plain titanium version – a gem-set Royal Oak rubs me up the wrong way – but the emeralds do set off the forest green dial nicely. I’d think the emeralds suit the precious metal version more than the lightweight titanium, but that might be a bit much.
All three pieces are equipped with the Calibre 2950 automatic movement with its open tourbillon at 6 o’clock and solid 65-hour power reserve. They are also limited editions, rising in rarity according to their materials. That means the full titanium is limited to 50, the titanium with emeralds to 15 and the full gold to 10. These are seriously top-end haute horological pieces, so those kind of numbers are to be expected. As for price, well, if you need to ask…
As part of its recently launched 2021 collection of green-themed versions of some of the brand’s most beloved watches, the Swiss watchmaker has announced the first-ever platinum Royal Oak “Jumbo” with a green sunburst dial. True watch-heads will note that this colorful reinterpretation of the dial comes in lieu of the brand’s typical waffle-pattern tapissserie dial. However, the stunning design suggests even purists will be able to embrace this new color scheme.

While AP has never shied away from colorful dials, the deep green is a decidedly less sporty take on the Royal Oak. This is thanks to a subtle color story that sees the striking green burst in the middle of the dial fade in a smoked gradient to a much darker tone at the dial’s edge.

The dial is framed in watchmaking’s elite alloy, platinum. And while this could be a weighty proposition, the Jumbo’s slim profile of 39 mm by 8.1 mm counterbalances the heft – it isn’t dubbed the “Extra Thin” for no reason. But don’t be fooled, even though this is a sleek and simple design, it packs engineering. Audemars Piguet treats us to peer through that display case back to catch a glimpse of a solid-gold winding rotor.

Sticking with the color theme, Audemars Piguet is sure to have people green with envy by limiting the watch to only 100 pieces. And even if you get your hands on one of these rare specimens you’ll have to drop an eye-watering $105,400. The Royal Oak “Jumbo” with a green sunburst dial will be available at Audemars Piguet starting this month.
Audemars Piguet’s still-under-wraps deal with Marvel already appears to have inspired a little Hollywood razzmatazz around Le Brassus.

Granted, the company’s unveiling of its 2021 collection — an unanticipated e-mail with a pdf look book of novelties that dropped into my inbox last night — was understated by Tinseltown standards, but a bright green flash on the front cover hinted at drama to come.

It was certainly a choice of presentation that showed confidence in this year’s novelties, and those with a penchant for green will not be disappointed with five Royal Oaks, all green but all distinct from each other.
As I’d expected (and possibly predicted, I forget), the colour blue has had its day on watches. We’ve seen all manner of them adorned in my favourite colour over the years, from the stylish and contemporary like white gold Submariner or the new Seamaster 300 Diver to the exquisite blues of Credor’s Eichi II and H. Moser & Cie’s Streamliner Flyback. Now, tastes are changing, and with the world being more concerned than ever about being environmentally friendly, it’s fitting that green is becoming the colour of choice for watchmakers. With that in mind, Audemars Piguet is leading the charge with five new green-themed Royal Oak models.