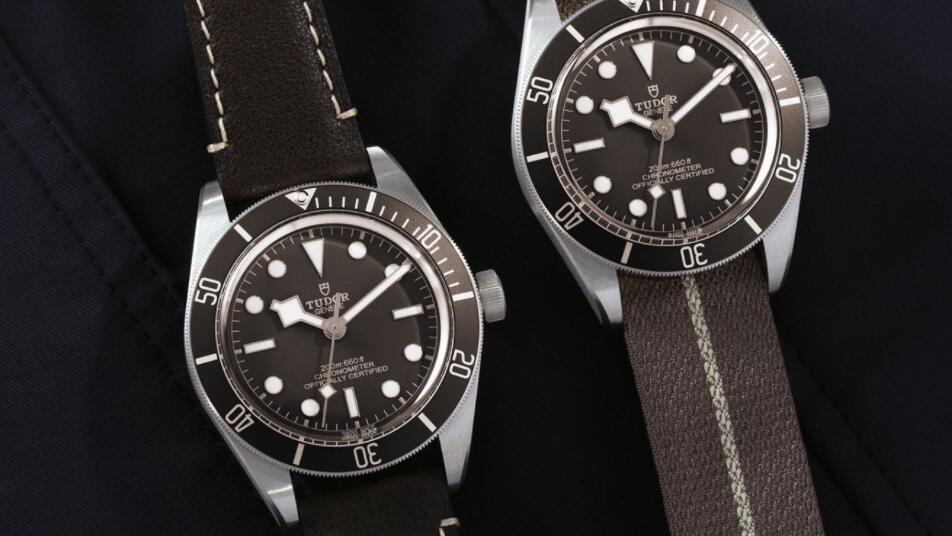 The Tudor Black Bay Fifty-Eight is one of the most well-regarded watch lines from Tudor and has always been influenced by the watch that helped to put the brand on the map back in 1958. Watches & Wonders delivers yet again with the announcement of two new versions of the iconic timepiece: one in 18k gold, the other in 925 silver.

Both watches owe their vintage 39mm sizing to the original Ref. 7924 from the 50s and aesthetically follow the trend of previous Black Bays including the signature ‘Snowflake’ hands that were added in the late 60s. Where they innovate is with the case materials and new open case back.
The 925 is the more intriguing of the two as it features multiple firsts for the brand. It’s the first-time silver has been used on any of their divers and it’s a great look with an understated matte finish to the semi-precious metal. Combined with the taupe dial, a particular shade of warm grey or cool brown depending on who you ask, the overall look is muted and faintly washed-out, emphasising the vintage charm perfectly. But while it might look vintage, its performance specs are entirely modern. It has 200m water resistance, supported by the screw-down crown and domed sapphire crystal, sure plenty of divers out there have 300m resistance but in reality, 200 is more than enough for the average dive. It’s also more impressive given the fact that this is the first diver from Tudor to feature an open case back, a feature that can impact a watch’s durability and wearability when underwater. The new case back is a nice addition to the range and shows off the Calibre MT5400 a little and why not, it’s a nice movement. It has all the finishing you’d expect from Tudor including sandblasting, polishing and laser details, maybe a little uninteresting but it’s cool that we get to see it. Then there’s the added benefit of being COSC certified with a 70-hour power reserve making it robust and gives you enough time to forget about it for a weekend and still have power for Monday morning.
The new case back can also be found on the Tudor Black Bay Fifty-Eight 18k version, which swaps out the taupe and silver for a green dial / bezel combo and a gold case. Like the 925, the 18k has a matt, satin-finish, a lot more subtle than the polished alternative. While the use of gold for this watch is technically a first, it is strongly reminiscent of previous Black Bays like the Bronze. Just you know, more expensive. The gold has been paired with a ‘golden green’ colour on the dial and unidirectional rotating bezel. Green has been a colour rising in prominence in watchmaking over the past few years and I’m afraid to say that this shade doesn’t really stand out, it somehow lacks the vibrancy of the Montblanc 1858 Lime Gold that follows the same colour scheme or the subtlety of the new Nautilus 5711. It’s nice enough but not outstanding.
They’re both interesting variations on the much-loved Tudor Black Bay Fifty-Eight 925 and even if I prefer the 925 for its silvery vintage charm, I wouldn’t be disappointed with the 18k either. Ultimately these releases are the introduction of some new case materials and a new case back to a watch that’s already super popular and will undoubtedly sell well. However, a few tweaks can go a long way and I look forward to seeing where they’ll take the Black Bay next.
There is no archetype in the history of horology that has generated more variations, more interpretations, and more attempts at reinvention than the mid-century dive watch. I don’t even have to say the names of the watches that started this genre, since you probably spoke them out loud to yourself at the end of my previous sentence. But it’s fair to say that for many people, this is what they think of when someone says the word “watch.” The mid-century dive watch, with its rotating timing bezel, it’s clean, no-fuss dial, and its sturdy case and bracelet profile, transcends any one watch at this point. It’s an idea as much as a thing itself.

That’s why a watch like the Replica Tudor Black Bay Fifty-Eight is so interesting to me. Tudor essentially created its modern update to the dive watch in 2012, with the introduction of the Heritage Black Bay. At the time, it was just one watch, but in the nearly eight years since, it’s grown into a family of watches at Tudor and a formula for other brands to follow. But while the Black Bay takes a number of cues from old-school dive watches, it doesn’t make any attempt to actually be one. It’s 41mm across, it’s relatively thick, and it’s styled in such a way that you’d never mistake it for something from the 1950s. The Black Bay Fifty-Eight is something different entirely.
With the Black Bay Fifty-Eight, Tudor splits the difference between the Black Bay and the original Tudor dive watches from the late ’50s. It balances a smaller case size and throw-back dial and bezel details with a brand new movement and modern build quality. It’s an homage that doesn’t have to feel like one if you don’t want it to. It moves seamlessly between the worlds of the old and the new in a way that feels unique and refreshing.