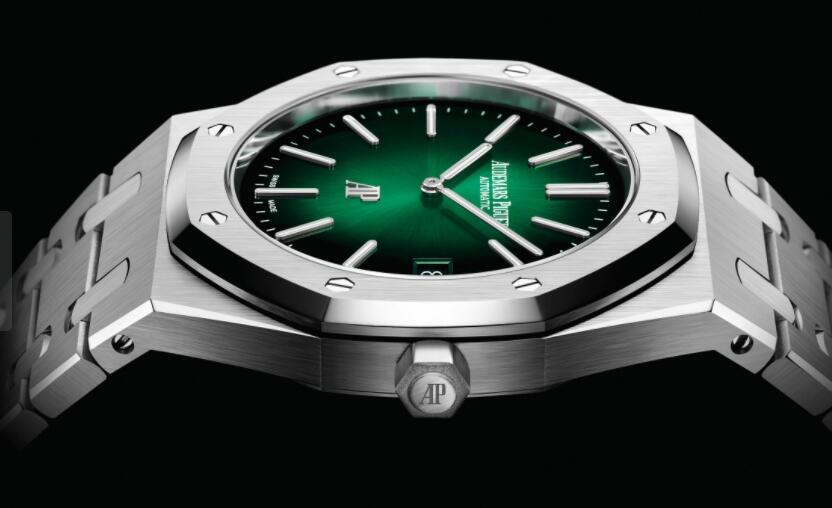 As part of a recently launched collection of green-themed versions of some of the brand’s most beloved watches, Audemars Piguet has announced the first-ever platinum Royal Oak “Jumbo” with a green sunburst dial. That’s right: Those who were simply green with envy towards anyone who managed to snag 2019’s “salmon adjacent” 152020BC can now commemorate the feeling with a truly striking smoked green dial. As the modern expression of the original Royal Oak format, the 15202 is a hugely popular reference, and this will undoubtedly be a hot-ticket item for anyone with their eyes on the current scene surrounding Audemars Piguet.

With 39mm of platinum case matched by a full platinum bracelet and a display caseback, this is a core Royal Oak offering with a  twist. While AP has never shied away from colorful dials, especially when it comes to the Royal Oak, the green feels a bit more middle of the road than some of the more bold offerings we’ve seen in the past, and I think that makes a lot of sense for the 15202. In many ways, this format – without chronograph, tourbillon, or otherwise – is a shorthand for Audemars Piguet Royal Oak Extra-Thin Platinum Green success, and it forms the roots of how many people come to know about the brand.

Judging by the images (though we hope to go hands-on soon enough), this 15202PT sports a bright but not overly shiny sunburst finish that is enhanced by a smoked gradient execution that fades to a much darker tone at the dial’s edge. Combined with bright and luminous white-gold markers and hands (along with no seconds hand), the 5202PT.OO.1240PT.01 is gorgeous, and the dial fade does a good job of matching with the visual weight of the date display, which appears to fade along with the shimmering green coloring.

The movement inside should surprise almost no one – AP’s lovely calibre 2121. Fitted with a solid gold winding mass and tracking hours, minutes, and the date, this movement has long been linked with the Royal Oak, and it’s always a treat to get a chance to peer through that display caseback to catch a glimpse of Audemars Piguet’s super thin (only 3.05mm!) automatic movement.

Still dubbed the “Audemars Piguet Royal Oak Extra-Thin ” at a very svelte 8.1mm thick, I doubt that the relative slim-ness will mean you don’t notice this chunk of platinum on your wrist, even without the razzle-dazzle of that emerald green dial. Currently, Audemars Piguet is listing the price as “available upon request,” but regardless of that number, we all know they will be hard to get (update: price below). As new watch season looms on the horizon, AP has the jump start, and the grass is certainly looking green in Le Brassus today.

Both case and bracelet are crafted from 950 platinum but the watch forgoes the model’s usual Tapisserie dial pattern in favour of an unorthodox smoked green sunburst dial, with the lack of relief changing the Royal Oak’s appearance considerably.

There’s little to distract from the dial itself with just applied 18kt white gold hour markers, hour and minute hands, a date window with black date wheel and minimal text, although the inclusion of the word ‘Automatic’ seems a little superfluous.

The watch itself is just 8.1mm from front-to-back, more than answering the ‘Ultra Thin‘ claim, especially in such a geometric design. This is made possible thanks to its self-winding Calibre 2121 inside, which despite its full-width, 22kt gold winding rotor, usually the first thing to go when designing an ultra-thin movement, is just 3.3mm thick.

The 2.75Hz movement has a power reserve of 40 hours and and is visible through a sapphire crystal exhibition caseback while the watch is water resistant to 50m.