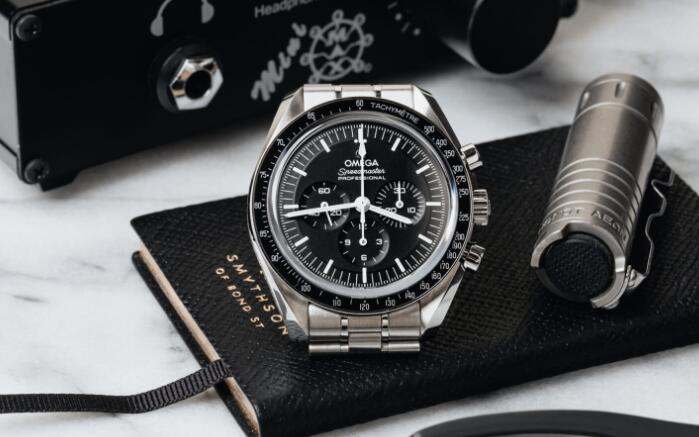 As we charge straight into the Year of the Ox, in the watch world, it’s really starting to look like the Year of the Chronograph, with blockbuster releases dominating the conversation thus far. Leading that charge has been the long-awaited update to the Omega Speedmaster Moonwatch Professional. And while demand for the venerable “Speedy Pro” has never formally waned in the collecting community, Omega’s hesitancy to modernize its most important property had maybe started to get a little long in the tooth, leaving the Moonwatch feeling dated in face of increasingly stiff competition from Breitling, TAG Heuer, and most recently, Zenith. All that changes with the new Master Chronometer-certified Speedmaster Professional Moonwatch, which fully modernizes Omega’s most beloved chronograph and subtly improves its visual identity while deftly appeasing the notoriously picky Speedmaster collecting community. More importantly, though, it finally gives “Speedy-curious” collectors a chance to revisit an icon and even perhaps see it in an entirely new light.Hesalite or sapphire? It’s the most natural place to start with the Moonwatch, and perhaps the best-known “this or that” quandary in the watch fam, albeit one with no real right or wrong answer. Unfortunately, the introduction of this new Moonwatch generation isn’t likely going to make the choice any easier. The new hesalite front crystal variant still remains the most faithful specification to that which was originally flight-qualified by NASA and would later walk on the moon, while this “sapphire sandwich,” nicknamed for its sapphire front crystal and exhibition caseback, tends to appeal to those who crave the visual identity of the iconic Moonwatch but with a subtle, more luxurious flourish. For this long-awaited update, Omega’s made the visual distinction between the two variants a little more apparent, with the hesalite coming in with a more matte presentation, and the sapphire getting polished center links, case flanks, and an applied Omega logo at 12 o’clock. The dial and physical bracelet of both versions have also been updated, and the watch is now powered by Omega’s state-of-the-art cal. 3861 hand-wound movement – all changes that do little to diminish what makes the Speedy great in the first place.It’s a monumental undertaking to overhaul a beloved property without forsaking its legions of fans – a collective so passionate, their fervor commands its own day of the week (hat tip to our buddy RJB at Fratello for pioneering the #SpeedyTuesday madness). So, to give credit where it is most certainly due, Omega’s designers did “just enough” to bring the Moonwatch current, paying fan service along the way, while wisely resisting the urge to dramatically overhaul the platform, as the brand routinely seems to do with many of its properties. I’ll be the first to admit that, though I’ve always loved Omega’s propensity to flip the script and continually tinker with its own formulas, taking a page out of a certain Geneva maker’s book – to make minor, incremental changes over the long term – was a welcome change of pace and absolutely the right call to make when it came to the crucially important Speedmaster Professional.It was a move made, perhaps, to correct past mistakes, as it was that persistent tinkering that led us to the 9300-series Moonwatch from 2011 – a dramatic, divisive, and then-modernized automatic Speedmaster Moonwatch with a bi-compax layout, a larger 44.25mm case, and 100 meters of water resistance. For a while, it felt as though this would eventually become the modern Speedmaster Moonwatch, but it was a Moonwatch in name only, and the community responded in kind. The line was quietly discontinued sometime in 2017 and was since clumsily re-named “Speedmaster Two Counters Chronograph,” to ensure there’s no mistaking the elemental components of what makes a Moonwatch a Moonwatch, which is to say, a 42mm case, three registers, no date, a hand-wound movement, and an aluminum tachymeter bezel – just as god and Ed White intended.

The new Master Chronometer-certified Moonwatch is everything that the “Two Counters Chronograph” tried to be – fully modern and dripping with all of Omega’s latest tech, but not at the expense of everything collectors love about the watch that went to the moon. In fact, despite all its newness, the new Speedy Pro feels very much like the old Speedy Pro – and I mean that in the best possible way. It’s a Speedmaster. There’s a tangible familiarity to its presence on the wrist – like an old friend returned from a summer at Space Camp – something’s indeed changed, but you can’t quite put a finger on it until you take a closer look.On paper, the biggest update is likely the METAS-certified Master Chronometer movement, but on wrist, the biggest change is clearly in the bracelet, which retains the classic five-link design but does so with a dramatic taper, and the three main links now sharing a similar width and much shorter individual lengths – a trait borrowed from late-sixties era ref. 105.012 Speedmasters, and one that lends itself to much greater comfort on the wrist. Much has been said about the lack of an adjustable clasp on this new reference, but with smaller bracelet links, one can inherently get a much more precise fit on the wrist, requiring only minimal micro-adjusting as needed.While Omega was under the hood updating the movement to Master Chronometer spec, it did make sense to refine the dial presentation, but only in the spirit of specific details that have long remained highly sought-after by collectors in the vintage Speedy realm. This includes a matte “step” dial that drops away at the edges where the minute markers meet (you’ll notice the second graduations have now been updated to correctly reflect the movement’s 21,600 vph beat rate), a “teardrop-style” chronograph seconds hand (pay close attention to its pointed base), and a “dot-over-ninety” (DON) tachymeter bezel made from aluminum. At the end of the day, most of it is just fan service, but perhaps what’s more important is that it all just feels tighter. More refined. More detailed. The Speedmaster has long enjoyed a reputation as a deservedly legendary watch (and a handsome one, at that) but it was starting to feel underwhelming, at worst, and a victim of its own hype, at best. The new Omega Master Chronometer Moonwatch rectifies this – it’s more of everything Speedmaster fans love (and let’s be honest, they’re a fickle bunch) without compromising any of the classic Moonwatch cues – how it relays vital information or how it has presented so perfectly on the wrist for the better part of the last 70 years.
Announced a little under a month ago, the new Speedy is already hitting the wrists of collectors who ordered from Omega’s own site, as well as from select boutiques. Instant gratification has never seemingly been part of the watch release cycle – especially Omega’s, but if this is a newly trending side effect from all the endless delays brought about by 2020’s pandemic malaise, I’m absolutely here for it. And if this is, indeed, the Speedmaster you’ve been waiting for, pricing for the “Sapphire Sandwich” (ref. 310.30.42.50.01.002) is $220 on the stainless steel bracelet. You can learn more and order your own from bestbuycheap.ru.