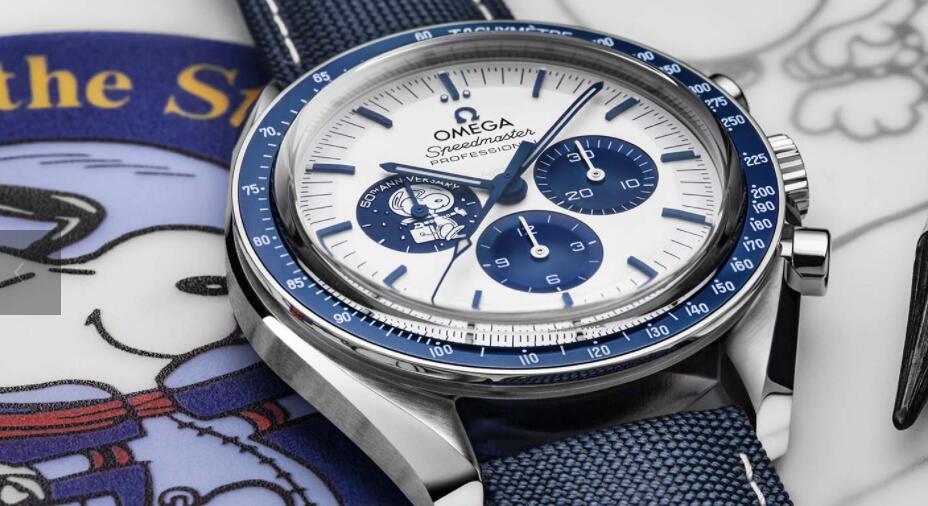 In 1970, OMEGA received the prestigious “Omega Silver Snoopy Award” from the astronauts at NASA. The prize recognised OMEGA’s unique contributions to space exploration, as well as the Speedmaster’s role in saving Apollo 13. Now, 50 years later, a special timepiece has been created in the occasion’s honour.
To really capture the iconic design history of the Speedmaster, OMEGA has included a 42 mm case in stainless steel, inspired by the chronograph’s legendary 4th generation style (famous for being the first watch worn on the moon). THE Omega SPEEDMASTER “SILVER SNOOPY AWARD” 50TH ANNIVERSARY
“Snoopy was chosen as NASA’s mascot in the 1960s, to act as a safety watchdog during space flight missions.”

“The iconic quote, ‘Eyes on the Stars’, is included within the black universe on the caseback.”
On the caseback, Snoopy appears inside his Command and Service Module (CSM) on a magical hand. When the chronograph seconds hand is used, Snoopy takes a trip around the far side of the moon, which has been decorated on the sapphire crystal using a unique micro-structured metallisation. There is also an Earth disc, which rotates once per minute in sync with the watch’s small seconds hand.
Powering the watch is the OMEGA Co-Axial Master Chronometer Calibre 3861 – the most recent update of the legendary Moonwatch movement. It took 4 years to produce a calibre that could achieve Master Chronometer certification, while also matching the dimensions of the previous Moonwatch movement – the 1861.
For over half a century, Snoopy has acted as the “watchdog” for NASA’s safety programme. As well as representing total mission success, he can also keep things light in serious situations. Since 1968, the Silver Snoopy Award has been presented to people or companies who have contributed significantly to “the success of human space flight missions.”
“I carried two OMEGAs in space. One on Mission Elapsed Time and one on Houston time.” Lt. Gen. Thomas Stafford
There have been previous Omega Speedmaster watches dedicated to Snoopy – but none quite like this! Combining animation with watchmaking art, OMEGA has produced a timepiece of exceptional style. You’re sure to spend hours admiring the details.