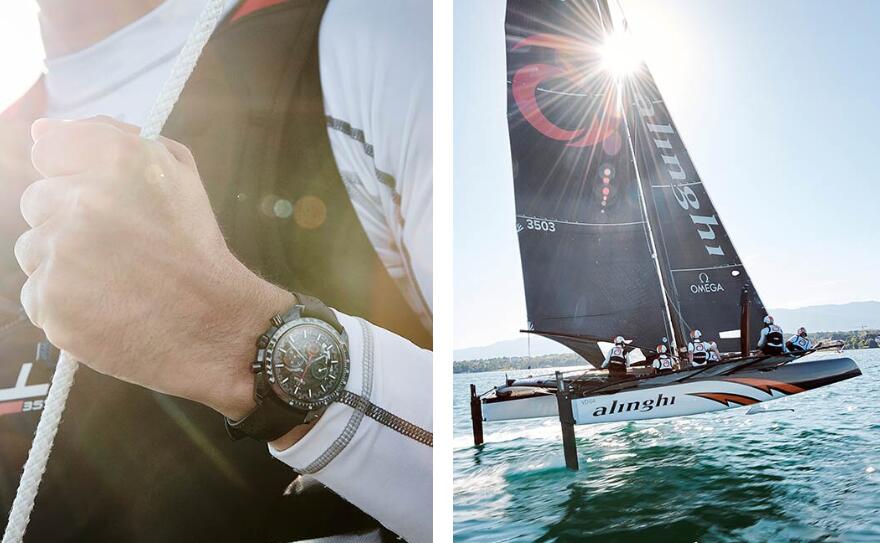 OMEGA’s Speedmaster Dark Side of the Moon ALINGHI

Much like a winning performance on the water, the stunning new sailing watch is the result of exceptional teamwork. The release of the Speedmaster marks a proud moment for Raynald Aeschlimann, President and CEO of OMEGA and Ernesto Bertarelli, Founder and President of ALINGHI, as the stylish chronograph beautifully represents the brands’ shared values: Swiss precision, innovation and pioneering spirit.

A competitive sailing team created by Ernesto Bertarelli in 1994, ALINGHI has been a mighty force on the waves, with America’s Cup wins in 2003 and 2007, seven Bol d’Or victories, eight D35 trophies, four Extreme Sailing Series championships and two GC32 wins in 2019: the Racing Tour Championship and World Champion title.

OMEGA’s Speedmaster Dark Side of the Moon ALINGHI perfectly reflects this impressive sailing record and the fast boats that fly across the water. The watch’s expertly decorated Calibre 1865 is a manual-winding movement ideal for life at high speed due to its lighter and thinner design. To enhance the movement, OMEGA Speedmaster Moonwatch has taken inspiration from ALINGHI’s new TF35 catamaran. Using laser ablation, the mainplate and barrel bridge have a honeycomb effect, similar to the interior of the ALINGHI boat’s hull.