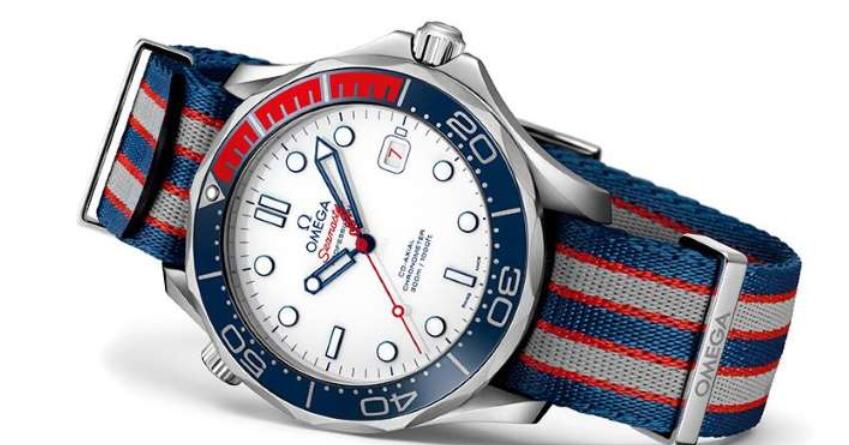 This is the latest James Bond watch from Omega Watches. It’s a Seamaster 300m Diver, and they’re giving it the indisputably excellent name “The Commander’s Watch”. Here’s everything you need to know about it:

What is it:
A Seamaster 300m, like we said. That means Commander Bond gets a 41mm steel case with blue ceramic bezel (Liquidmetal scale, naturally) on a blue, red and grey striped NATO strap. The dial – quite unusually for Omega and for Bond watches – is polished white ceramic with blue hour markers and blue skeleton hands. The red seconds hand has a “007” counterweight that we’ve seen deployed before.
Inside is Omega Calibre 2507 – a co-axial automatic with a 48 hour power reserve. It’s been used on Seamasters for a few years, including the model produced to mark James Bond’s 50th anniversary. The watch will be produced in a “limited” run of 7,007 pieces, priced at £3,720. You’ll be able to buy one from July 6th.

The Design:
It may be inspired by the formal regalia of a Commander in the British Navy, but this is one heck of a jaunty, casual look for James Bond. The NATO strap does a lot to that end, of course, as does that bright white dial with the pops of blue and red everywhere. It’s awfully patriotic, of course, and will no doubt give some people a Stars and Stripes vibe as much as a British one. It’s also reminiscent of Omega’s work creating sailing watches for Team New Zealand. And apart from that seconds hand, it doesn’t have an awful lot that screams James Bond (gone are the 007 printed dials of yesteryear).
Why Now?
According to Watch Omega this watch marks three noteworthy anniversaries of James Bond films: 50 years since You Only Live Twice, 40 years since The Spy Who Loved Me, and 20 years since Tomorrow Never Dies. If we were being unkind, we’d say that given there have been 21 Bond films over the past 60-odd years you could pretty much throw a rock and hit a significant date, but there you go. Apparently these are three films in which Bond specifically appears wearing the Commander’s uniform, so that is something.

As for why James Bond wears a Seamaster at all, we hear that costume designer Lindy Hemming, who worked on all the Pierce Brosnan Bond films, is to thank. She says “I was convinced that Commander Bond, a naval man, a diver, and a discreet gentleman of the world would wear this watch as opposed to the one everyone expected me to use.”
“My father had been in the RAF but was friendly with navy men and I remember as a child one often visiting us, and he always wore this Omega, which fascinated me – this unusually sporty design that looked as though it was built for purpose. It’s the small details that really matter. So one of the early tasks in designing the new Bond, Pierce Brosnan, I went to a props and hand props meeting and argued for the use of Omega.”

Omega did also provide Seamaster 300s to actual Royal Navy divers in the late 1960s, so perhaps the link is more historically accurate than she knew.
The Exclusive Version:
If a limited run of more than 7,000 watches (for context, some pretty popular watch brands make fewer than 7,000 watches in a year, full stop) doesn’t seem quite rare enough for you, Omega is going to have you covered. There will also be seven pieces made in 18k yellow gold – Bond, to the best of our knowledge, has never worn a gold watch, and there isn’t much chance he’d keep his cover for long (admittedly, never a high priority) in one of these.