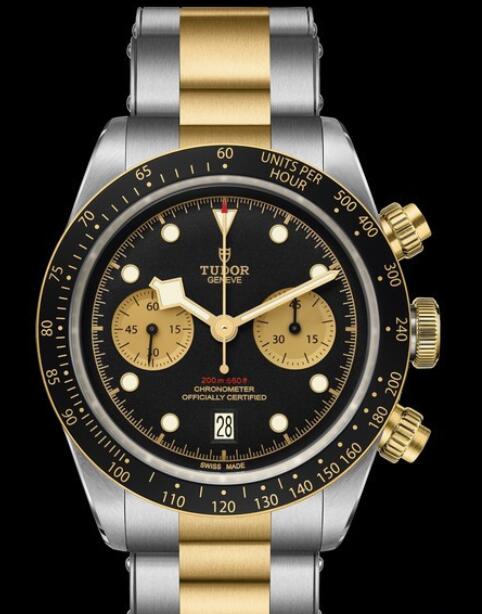 The famous Black Bay family introduced the first TUDOR chronograph, powered by the self-winding Manufacture Calibre MT5813, with a column wheel and vertical clutch. This model is now available in an S&G version.

With a 70-hour power reserve, a silicon balance spring and Official Swiss Chronometer Testing Institute certification, the Manufacture chronograph Calibre MT5813 that drives the Tudor Black Bay Chrono Replica S&G model is a high-performance movement. It was designed in the purest watchmaking tradition, with a column-wheel mechanism and vertical clutch. In keeping with the TUDOR philosophy of quality, it presents extraordinary robustness and reliability, guaranteed by an array of extreme tests applied to all TUDOR products.

The fabric strap is one of the signatures of TUDOR. Woven on 19th-century Jacquard looms by a 150-year-old family firm from the region of St-Etienne, it offers unique quality and comfort. The Black Bay Chrono model presents a black strap and is also available with a steel and yellow gold bracelet, inspired by the folding riveted bracelets of TUDOR watches produced in the 1950s and 60s. Famous for having rivet heads for attaching the links, as well as a stepped construction, these two aesthetic details are incorporated into the new model. Finally, in a spirit of 1970s racing, the Black Bay Chrono offers a bund-type option in brown aged leather with ecru stitching and a folding clasp.

Since the presentation of TUDOR’s first chronograph in 1970, the Oysterdate, the brand has always produced watches closely tied to the world of motorsports. Since 1954, TUDOR has been constantly improving its professional divers’ watches. The hybrid Black Bay Chrono S&G Replica chronograph (Steel & Gold) combines the brand’s aquatic heritage, represented by the Black Bay family, with the queen of the racetrack – the chronograph – resulting in a sporty-chic watch with a distinctive touch of nostalgia.